Using their free time to lend a hand however they can, one local couple has volunteered their services to anyone who may need them over the next few weeks.

Maybe you've heard of Blank Trails, maybe you haven't - either way, it's time to get acquainted. An Instagram page run by Irish couple Fiona Barry and Keith Ward, the page started out as a diary of their travels through Latin America... later becoming a way for the duo to campaign for a ban/regulation on the sale of cats and dogs in pet stores in Colombia.

Returning home from South America last year, the plan was to make the move to Canada, but, as with everything, Covid has since put those plans on hold. Back in Ireland for the foreseeable, both Keith and Fiona have been looking for work but between one thing and another (lockdown one and now, lockdown two), it's been tough to find anything.

Saying that news of a second lockdown hit her "like a tonne of bricks", Fiona realised the true impact that a return to level five restrictions will have on people - with both herself and Keith deciding to use their free time to lend a hand wherever is needed.

"Keith and I had plans to emigrate to Canada in May, but like everything else, Covid put a stop to that. We've both been looking for work over the past few months.

Being in lockdown the first time around was tough, but the longer days and sunnier weather made it that bit more bearable. Monday's announcement hit me like a tonne of bricks, I knew it was coming but there was the realisation that this time around - with the shorter days and colder weather - it was going to be a lot tougher for people mentally, emotionally and financially."

Worried for the welfare of the most vulnerable members of the community, it's Fiona's elderly neighbour, Otto, who really got her to thinking about what could be done.

"My widowed neighbour of nearly 30 years, Otto, who lives alone turns 90 on October 27th and thinking of him spending it in his house locked away was too much. I have two very elderly and vulnerable neighbours on my small road of only 20 houses, so if you think about that in terms of Dublin and the rest of Ireland, there's bound to be thousands in the same situation as them."

Using their social media platform to volunteer their services, a post shared to their account on Monday night has been met with overwhelming positivity from locals.

The post attracted so much attention within the first night. For example, a girl in London reached out to say her mam who's 77 and lives alone would have to cocoon for the next six weeks, meaning she couldn't go for her daily walks. She asked if we knew anyone selling an exercise bike... we put the word out there and 15 hours later we had collected a bike, disinfected it (of course!) and delivered it to her house.

We had messages from people asking if we could get up to their elderly neighbours and grandparents over the next few days with essentials and we spent yesterday afternoon delivering stuff around D9."

Also printing off what she calls 'Covid care cards (see below), Fiona and Keith will be filling them out and dropping them into over 100 houses within their surrounding areas. Complete with their name and number, the idea is to let people know that there is help out there for whatever they need.

"The cards will have my name and number on it and will let people know I'm available to collect shopping, essentials, prescriptions, walk their dogs or even just phone call them for a chat." 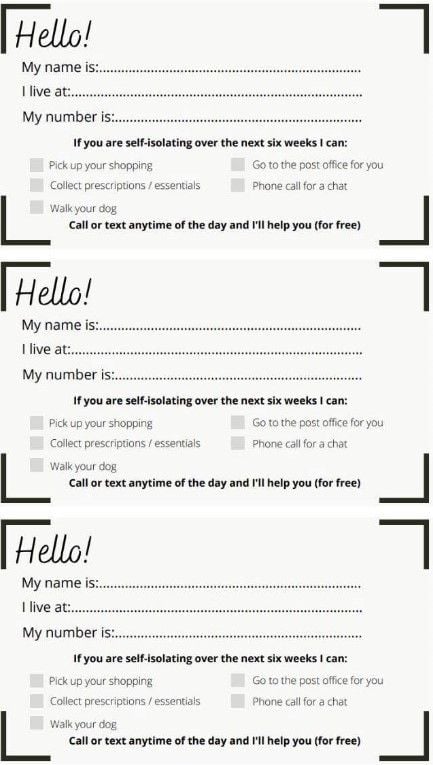 Admitting that she didn't feel she was "contributing positively enough to the current situation", Fiona decided that she need to change that - adding that this is "the only way" she knows how.
"Keith and I are going to help as many people as we can get through the next few weeks and beyond. I want people to know that so many have reached out already, so please do not be ashamed or worried if you need to too."
What about Otto says you? Don't worry, he'll be well looked after with people as far afield as Oz sending in birthday treats for his big day.
"He's going to be spoiled next Tuesday. Already I'm receiving cards from as near as Artane and as far as Australia for him. People are buying him gifts and delivering them to my house and our local Supervalu in Killester is making him a cake!"

Another thing we organised over on our insta was making sure an elderly neighbour who turns 90 next week wouldnt go without celebrating his birthday. Currently 50+ people have sent us birthday cards to give to him from all over the world!!! Then this gesture from @SuperValuIRL ? pic.twitter.com/2lvWe82aMj

Well deserved - a 90th birthday is definite cause for celebration.
Things may seem a little glum at the minute, but feelgood stories like this would warm even the coldest of hearts. Keep up the amazing work, guys.