If you're wondering what Mara Wilson is doing these days, she's currently being educated on what it takes to be cool in Dublin.

Confused? You should be. Mara Wilson, child star of such movies as Matilda and Mrs Doubtfire sent out a fairly innocuous tweet about The Breakfast Club this morning, referencing the scene in which Judd Nelson's character lights a match in his mouth, a reminder of which can be viewed below...

Among those who responded was a Dubliner who explained that he was well-versed in the practice, to which Mara Wilson replied 'This is exactly what I imagined cool teens in Dublin did for fun.' 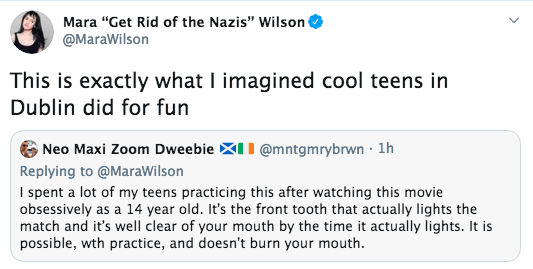 Yeah, we're pretty badass over here, Mara and lighting matches with our teeth is just one example of our maverick nature. Another tweeter chipped in with 'we mostly just hung out in front of a bank on Dame St in gangs of goths n skaters' which isn't far wrong for a large percentage of 1990s Dublin teenagers to be fair.

Someone else played down Mara's perception, telling her that 'no one here is cool' while another reckoned we're all going around forming soul bands à la The Commitments.

Whatever the case, the little girl from Mrs Doubtfire should have a better idea of how to appear chill the next time she comes over to visit.

The whole thread can be viewed below if you're not too cool to read it...

This is exactly what I imagined cool teens in Dublin did for fun https://t.co/RnZd80hi4d

Plans approved for new hotel development in The Liberties

A pint of plain face mask is your only man

People have been rewatching The Commitments in honour of Alan Parker