Blue Monday is just around the corner and to counteract what is supposed to be the most miserable day of the year, NoLita are putting an amazing deal for their customers.

From Monday, January 20 until Thursday, January 23, the George's Street eatery will be offering a 2-for-1 deal on all of their authentic Italian wood-fired pizzas and that should be more than enough to keep the Blue Monday despair at bay, don't you think? No? Fair enough.

In that case, NoLita will also be throwing in the chance to win tickets to some of the biggest gigs of 2020 including Gavin James, Dua Lipa and, arguably the new Holy Grail of Irish festivals, All Together Now. All you have to do is pop into NoLita on any of the aforementioned dates to be in with a chance of winning. 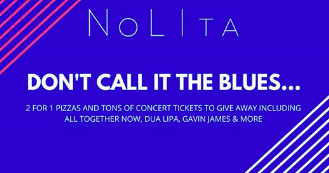 NoLita has also promised that additional concerts involved in the deal are yet to be announced. As usual, terms and conditions apply and you can find out more about this incredible offer here.

Blue Monday was first devised as a concept in 2005 and is generally believed to fall on the third Monday of January. It's seen as the most depressing day of the year with factors such as weather, failing New Year's resolutions and the time until payday all taken into account.

Well, the experts say Blue Monday was devised in 2005 but New Order released this banger in 1983 so who are you believing?

Whatever the case, next Monday, Tuesday, Wednesday and Thursday are bound to be a bit less blue with Nolita's amazing offer.

READ NEXT: Bunsen has ranked very highly in the 'Best Burgers In Europe' list for 2020