Brunch in Dublin has been needing a firm kick up the arse for a long time now.
The offering in recent years has veered between overwrought or underwhelming with little in between. With the introduction of the bottomless Prosecco offers, brunch in the capital has steadily devolved into an up-market dystopian nightmare with shakey drunks wielding hollandaise-slathered lobster claws and crimes against the humble pulled pork going unpunished.

Enter a welcome newcomer to the slightly no-man’s stretch of Pearse St between Grand Canal and Trinity. Gertrude is sister to 3FE which has been instrumental in upping Dublin’s café game for years with locations around the city. 3FE have been hinting, with their impeccable, if compact, daily breakfast and lunch menus, at bigger things to come on the food front and Gertrude, it seems, is it. 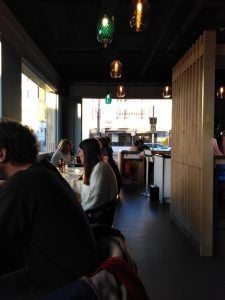 If Gertrude is the sister, make no mistake - she is not the gauche younger sister but the cool one. Like your friend’s hip sister who’s been living in London since college and whom you’ve never met. Or that time Reese Witherspoon was Rachel’s sister in friends.

Currently Gertrude is focusing on day trade with dinner served only on Friday and Saturday nights but expansion is certain with a 15-year lease and basement seating available in the future. I made my way into the bustling, generous space at the latter stages of a hectic brunch one Saturday afternoon. The space is exceptionally cheery, think muted blues and greys with yellow accents and fresh flowers by Appassionata. Large windows stretch along two sides of this corner spot filling the high ceiling room with light. The whole place is clean lines, attractive details – a spiffing yellow coffee machine greets diners — and smart use of space. A wooden structure provides a zoning strategy to enclose the front of house serving station while the relatively large open kitchen is tucked away at the back.

Brunch is divided into Snacks, Bigger Plates, Sides and Something Sweet. Characteristically over-eager, I was immediately rash and wanted to order two snacks and three main courses. Thankfully I was talked out of that particular food coma but when a menu is that appealing it can be hard to, well, stay calm.

The snacks presented a difficult choice. I’d have knocked back every one of the small plates on offer to be frank. Cooleeny croquettes with beetroot ketchup, bacon and cabbage dumplings and salami spread with sauerkraut on toast were all sounding irresistible. Spreadable pork is definitely having a moment of late, harking back to my visit to Stonybatter’s Grano last week.

“I just want some spreadable MEAT,” I announced giddily to my companion who demurred saying that that was “TMI”, fair – given she is my cousin.

We opted for the croquettes. Cooleeny cheese hails from Thurles and is a bit of a fave of mine. It’s creamy and buttery, like an Irish cousin of a Mont d’Or. The croquettes arrived, a lovely deep golden brown crust, nestled on a generous smear of purple beetroot ketchup. I was ready to fall in love. Unfortunately, the cheesy centre had a slightly floury taste that disappointed in that way of a Tinder match telling you his favourite film is Fight Club. 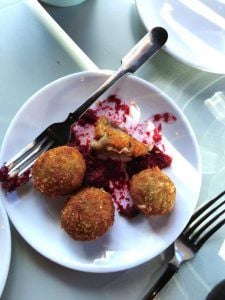 I so wanted it to work with the croquettes and there was a lot to like on paper. The crunch was there and the beetroot ketchup was a total winner, but the ever so paste-like filling was a deal-breaker. It may have been a dud bad batch and I haven’t written them off for a future rekindle for future visits, especially as so much about the plate worked.

For our mains we had a lot of decisions to make. Gertrude are not dumbing things down for the Brunch market. They have included three brunch fail-safes and then gone on some brilliant freestyle tangents. For conservatives, there’s granola, pancakes and the Dirty Gertie (it’s the usual breakfast meats, beans, toast and eggs delivered with a bit of flair, all sauces in Gertrude are made in-house including the brown sauce). Now, to the fun stuff. There’s crushed carrot on toast topped with whipped tofu, pickled onion and smoked almonds. Soft scrambled eggs come with crab, kale and fermented hot sauce. But the thing that I cannot stop thinking about is the Tonkatsu sandwich - essentially breaded pork with curry sauce and cabbage in a goddamn batch bread sandwich.

I know, I know. How could I leave that uneaten? Well, friends, something even more tantalising presented itself. Buttermilk fried chicken with pancakes, hot sauce, orchard syrup and a wedge of butter.

“It sounds terrible…. But amazing???” We were confused but sold. It arrived and for a largely beige plate, it looked incredible. I’m thinking it’s a play on the American dish of fried chicken and waffles which borrows from a few different culinary traditions but is largely associated with Soul Food. The plate had all the excess of a traditional American diner breakfast but eloquently rendered. It was delicious. The pancakes were excellent – light and fluffy, no stodge here, the chicken crisp and succulent, but what was most impressive to me was the exacting balancing of flavours at play. The fermented hot sauce was the perfect level of heat and the orchard syrup brought the sweetest harmony to the combination.

Our other big plate was the duck steam buns which didn’t deviate too much from the usual bao bun idea; slow cooked duck, green chilli relish and spring onions in a bun with a very tasty pickle salad on the side. I felt the filling, which was truly delish, could have been a bit more generous, the other issue was that one bun in the portion of two was warm while the other was cold. Similarly our side of chargrilled broccoli and smoked almonds, while a lovely combination, was also cold. I also felt the broccoli was a shade over-cooked, certainly more flaccid than “chargrilled” suggested.

The desserts were divisive in our party. There are currently three choices. We eschewed espresso soft serve in favour of the brown sugar tart and apple fritters with custard. My companion was disenchanted with both while I was devoted to the apple fritters and was verging on inappropriate with the ramekin of custard such was my ardent affections.

The brown sugar tart, unfortunately, was the first thing we’ve probably been so united against since our granny tried to talk about sex on Christmas Day 1998. Issues may have started when we asked one of the wait staff to break down just what exactly was “brown sugar tart”. He said it was like a crème brulee done in pastry which is totally accurate. However, he neglected to mention that the whole thing came covered in a dark coffee syrup. For me, it just didn’t work on any level. The custard in pastry was just too dense, I felt it was crying out for a bit of fruit to break things up somewhat, and the addition of coffee syrup was doing nothing to lighten the load in terms of flavour. Also there’re a lot of things I don’t mind being omitted from a description but a coffee syrup lashed all over the damn thing warrants a mention.

In fairness, our excellent server (not the syrup-denier) noted our lack of enthusiasm for the tart and didn’t shy away from asking if there’d been a problem. We chatted and were informed that reception to the tart had been mixed and perhaps it may simply be a matter of personal taste.

We concluded with tea and coffee and soaked up the last of the winter sun streaming through the windows. My lasting thoughts are that while overall the experience was somewhat mixed, the highs were very high – nailing fried chicken on pancakes tells me the experience and talent in the kitchen is considerable. The bum notes could well be put down to issues of timing and teething – it is barely two months in operation. One senses that Gertrude is a place with an ethos and the pedigree of the team at the helm – Holly Dalton manned the stove in the original 3FE and Colin Harmon virtually single-handedly hauled Dublin’s café culture up into high gear – suggests the evolution will be worth watching and sampling regularly. I know I definitely have some unfinished business with the Tonkatsu sandwich, not to mention the dinner menu which has some seriously tempting additions. Watch this space.