It's only once in a blue moon that I put the words 'hidden gem' in a headline.

I don't ever want to tell you that a coffee shop that everyone goes to, or one that is bang smack on the main road, is worth this kind of hype. Only a very small amount are handpicked and given this kind of glory.

After visiting The Blue Anchor, I contemplated keeping this one my secret so that it would stay quiet and mysterious. Thing is, I admire the owner so much that I want ALL of the business for him.

You wouldn't even know The Blue Anchor exists.

The place is very funky as it’s hidden, small, and boasts an unusual wine list.

I got my taxi to drop me to Meath Street and when I got out, I have to say, I was a little confused. I had been informed that it was behind Legit Coffee Co. but its shutter was closed. After a few attempts walking up and down the street, I took a left turn and to my delight, there it was.

The front looked like a garden porch, it kind of felt like I was walking into someone's house. Inside it was very simple, a few paintings on the wall and only a handful of tables and chairs - super intimate, very chilled and cosy. 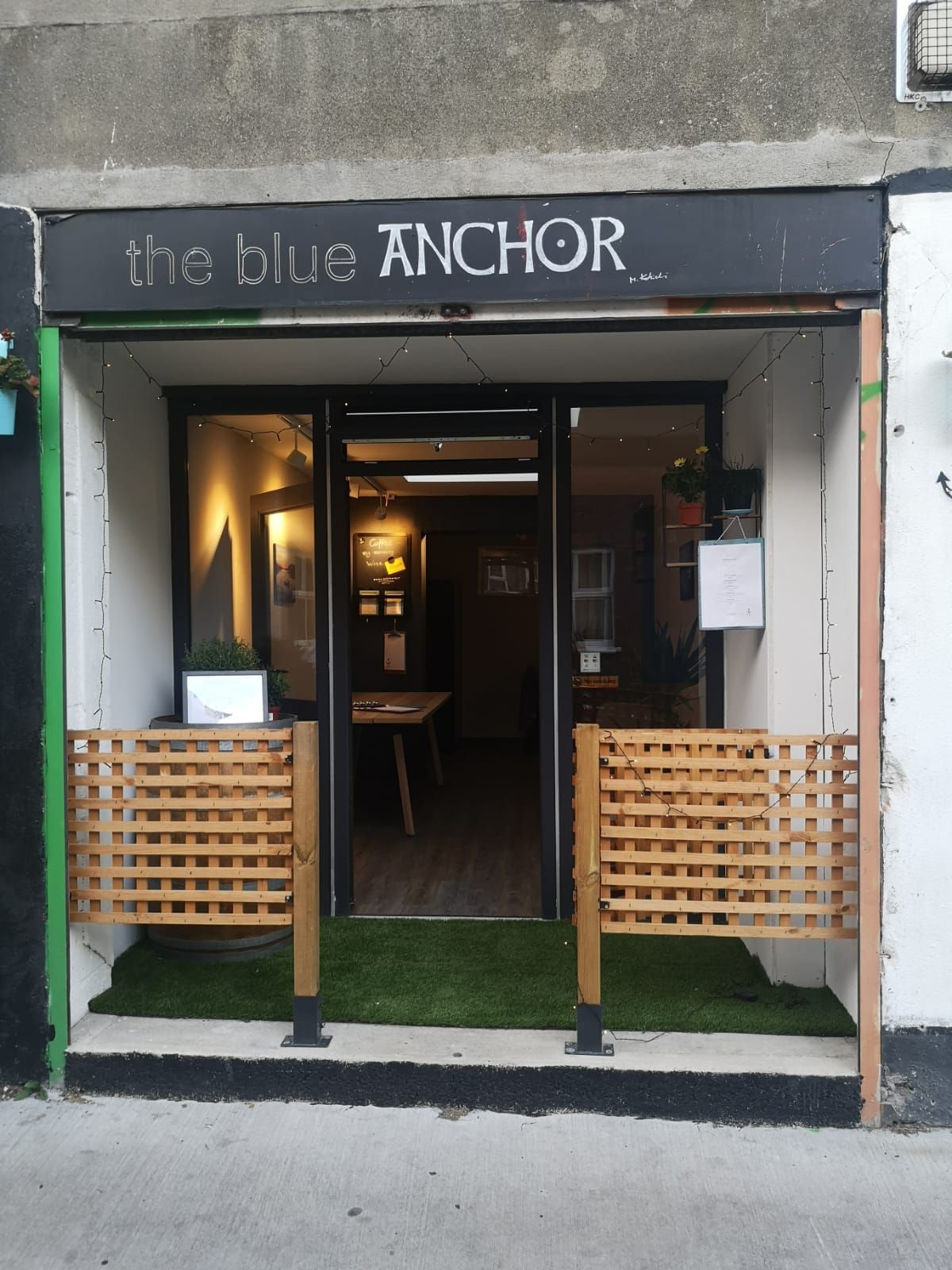 I was greeted by owner Marcin, he sat us down at the back at a little table by the wall. He was so friendly and talked us through every aspect of the meal that we were just about to have - I could tell he was super passionate and so proud of this little nook.

He started with the wine, "What do you drink?"

"An Argentinian Malbec" I replied.

He shook his head:

"You won't find Argentinian Malbec here, it's all European."

Marcin is Polish so he has a few labels from Poland, Germany, Austria, Georgia, Hungary and Greece. Nothing from France, Spain or Italy or New World. Most are organic and natural.

Wine bars are up there as one of my favourite places for date night. They're always romantic, I'm cheese obsessed and obviously, it's the best place to get a proper glass of vino.

As I looked at the wine list I realised that I knew very little about European wine but I was very excited to try it.

I started with a red from the Czech Republic, it had hints of berries and summer sweetness - ideal for the cheese board that was put in front of me as I sipped.

Cheese boards are usually pretty similar wherever you go but this board has some really interesting textures and flavours that I had never tried before. It was paired with traditional Polish bread - me being the snob that I am, I would have much preferred a crunchy sourdough for my cheese than this as it was quite similar to sliced pan.

The cheese board, however, was so bloody tasty. It also had honey, sundried tomato, a range of meats and mango. The flavour was just insane, I was in cheeseboard paradise and this was only the starter.

Cheeseboards are usually my go-to dessert option as I'm super picky when it comes to sweet dishes, but having it to start for a change was really lovely. We had so much time to natter and nibble as we waited for the mains. 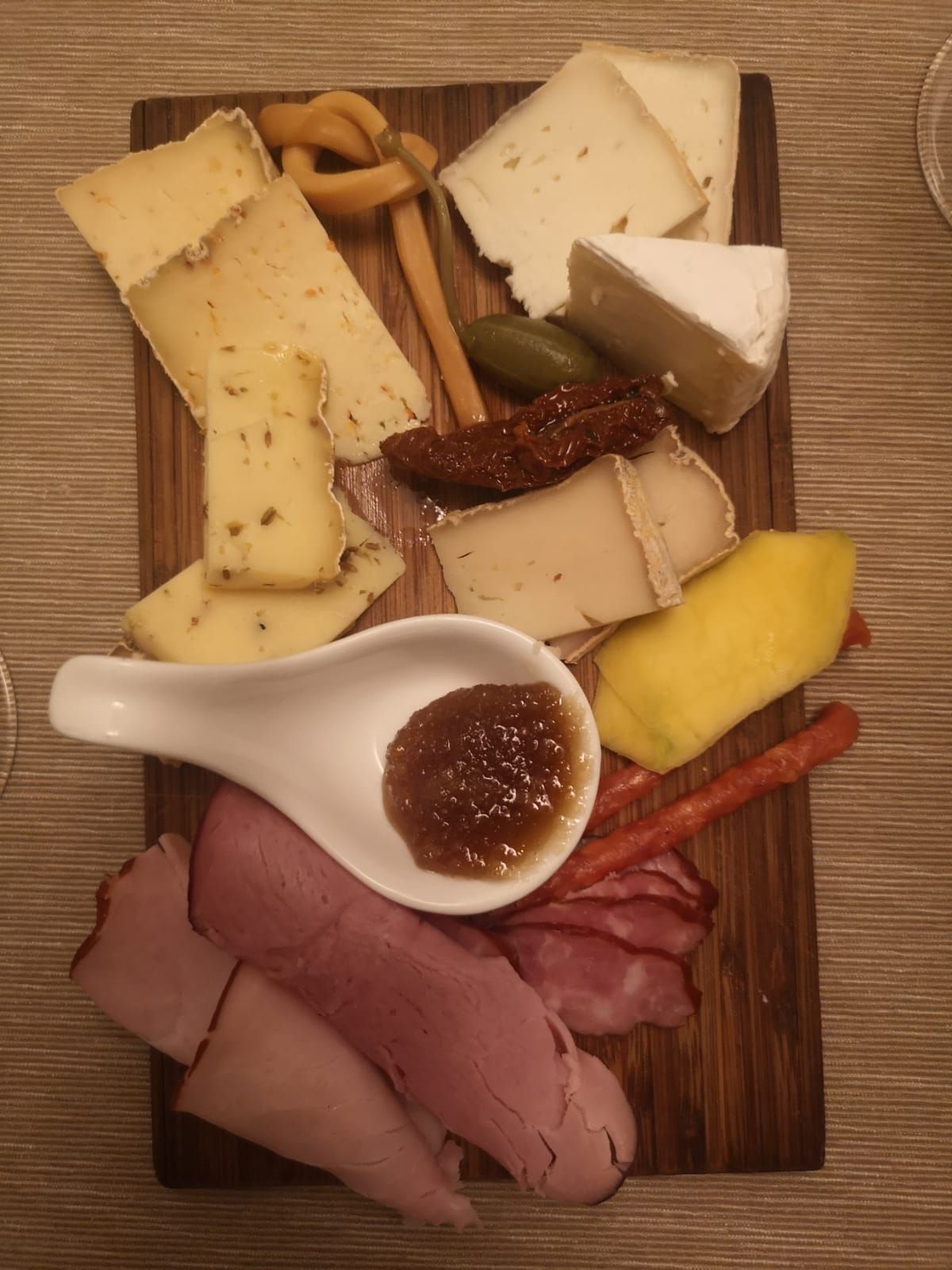 Moving on, we were presented with a stunning prawn dish with hints of apple and chilli - a strange combination but it was really tasty and super light.

I would have liked the prawns to be soaked a little more, or more flavour in the dish all round, but because it was in between starter and main I didn't really mind it. 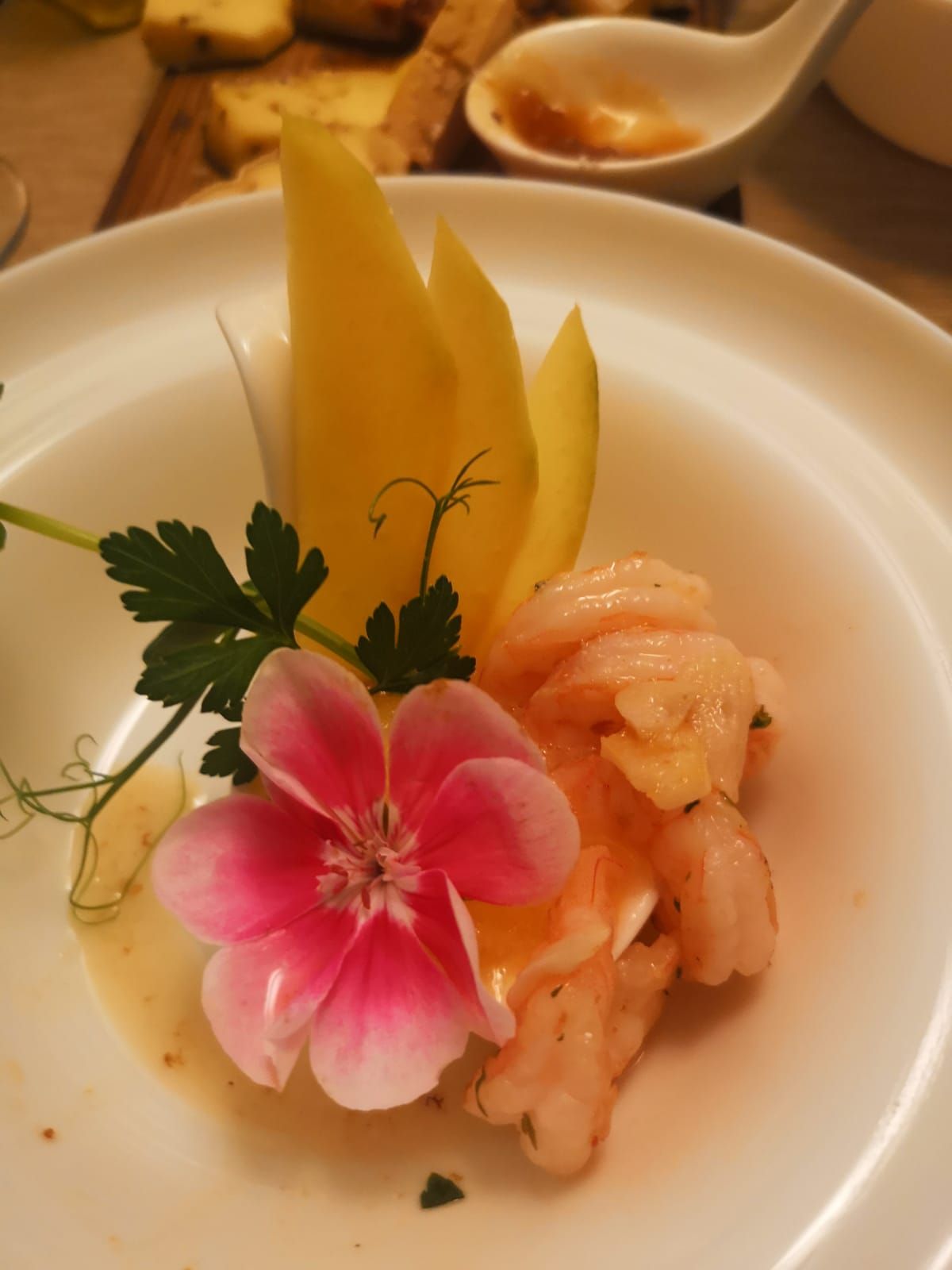 Mains consisted of large gnocchi-like potato cakes and stew. I could tell the meat had been cooking for hours, there was so much flavour and the potato cakes added something new and unique to the dish.

My boyfriend's favourite dish in the world is stew so to get a thumbs up from him as he tucked into it says it all. I've never had anything like it in Dublin, or anywhere else for that matter, which I loved.

My boyfriend was drinking white wine and for his main, Marcin gave him an orange wine. It was super refreshing and something I'll definitely be coming back for. 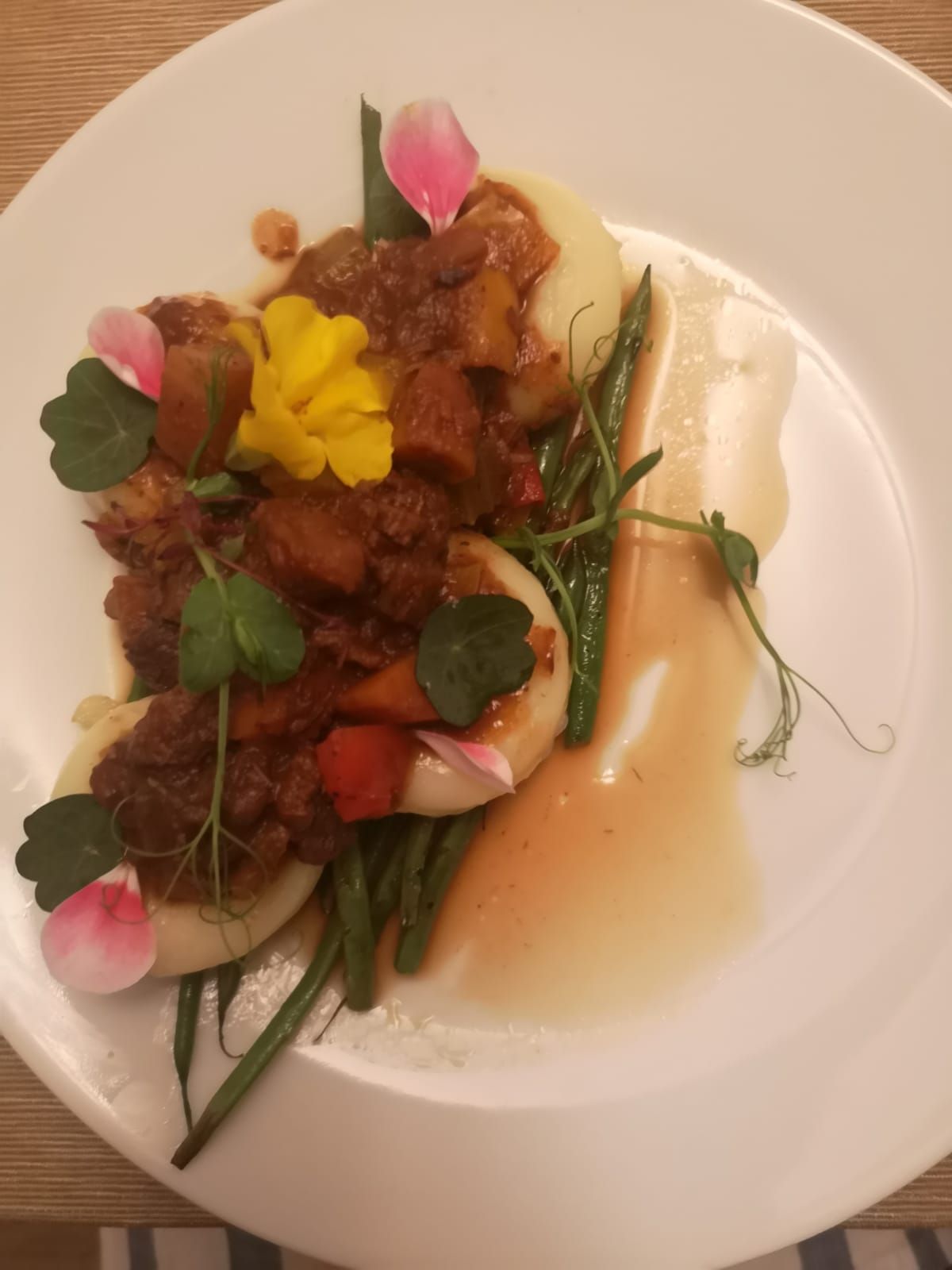 As I said before, I'm not the biggest dessert person, mainly because I'm disappointed more times than not when it comes to my final dish.

It seems like restaurants in Dublin think if you slap a microwaved brownie on a plate that people will be happy. Well, not me because... I'm a bit of a prissy bish.

Marcin brought us out chocolate fondant made with wine sauce. I usually hate alcoholic desserts but this was fab. It was paired with cream; I would have preferred ice cream but I was really impressed. One or two spoons was enough for me as it was very rich and filling but those spoons were seriously good. 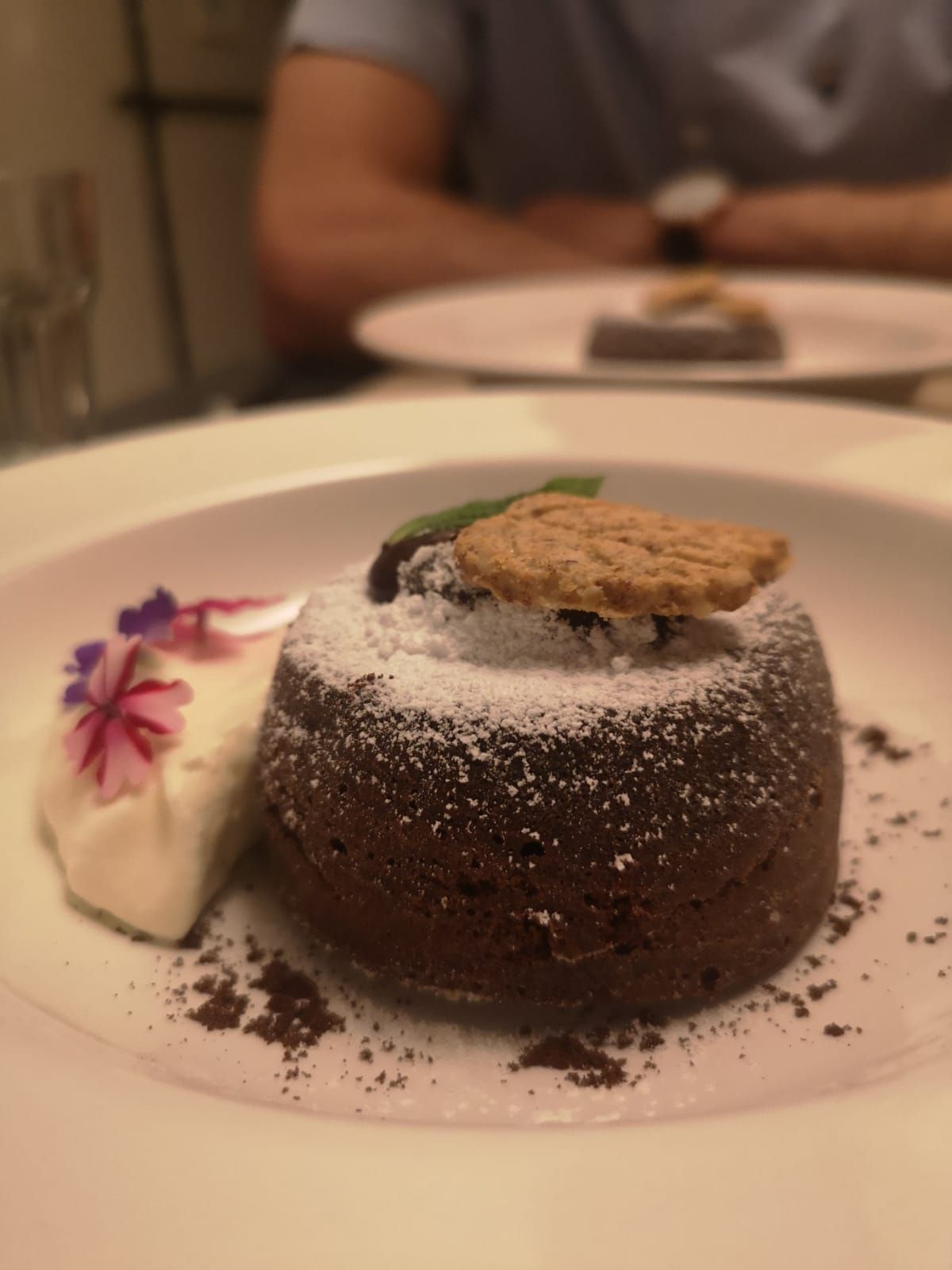 This meal was one to remember. The whole experience was everything you'd hope for on a date night. Marcin was so engaging, took us through every single dish, why he chose it and where each ingredient was from. Of course, there were some chats about Poland, football and the Dublin food scene along the way.

He was such a lovely host and really does deserve a booked-out venue every night of the week.

We finished off the night with some Greek wine after my boyfriend informed Marcin of his Greek heritage - things like this made the meal so personal and memorable.

The Blue Anchor serves a three-course set menu on Friday and Saturday and cheese boards from Tuesday to Thursday.
This is Dublin's ultimate hidden gem!
Share: