"The work that has gone into the 2019 Gaiety Panto is no laughing matter and Aladdin is one of the most spectacular shows in years."

Is there such thing as the ‘Best Panto in Ireland’? I don't think so. Each one caters to a different need - The Helix is always the funniest thanks to Karl Harper’s (Coppers The Musical), hilariously dry scripts. The Olympia is probably the best craic and the one to head to if you’ve been on the afternoon wine. But The Gaiety is the Panto to choose in 2019 if you’re looking for sheer excellence in production value and Disneyesque magic. The costumes, the sets, the talent, the effects, the storytelling, and the choreography, are simply unbeatable. 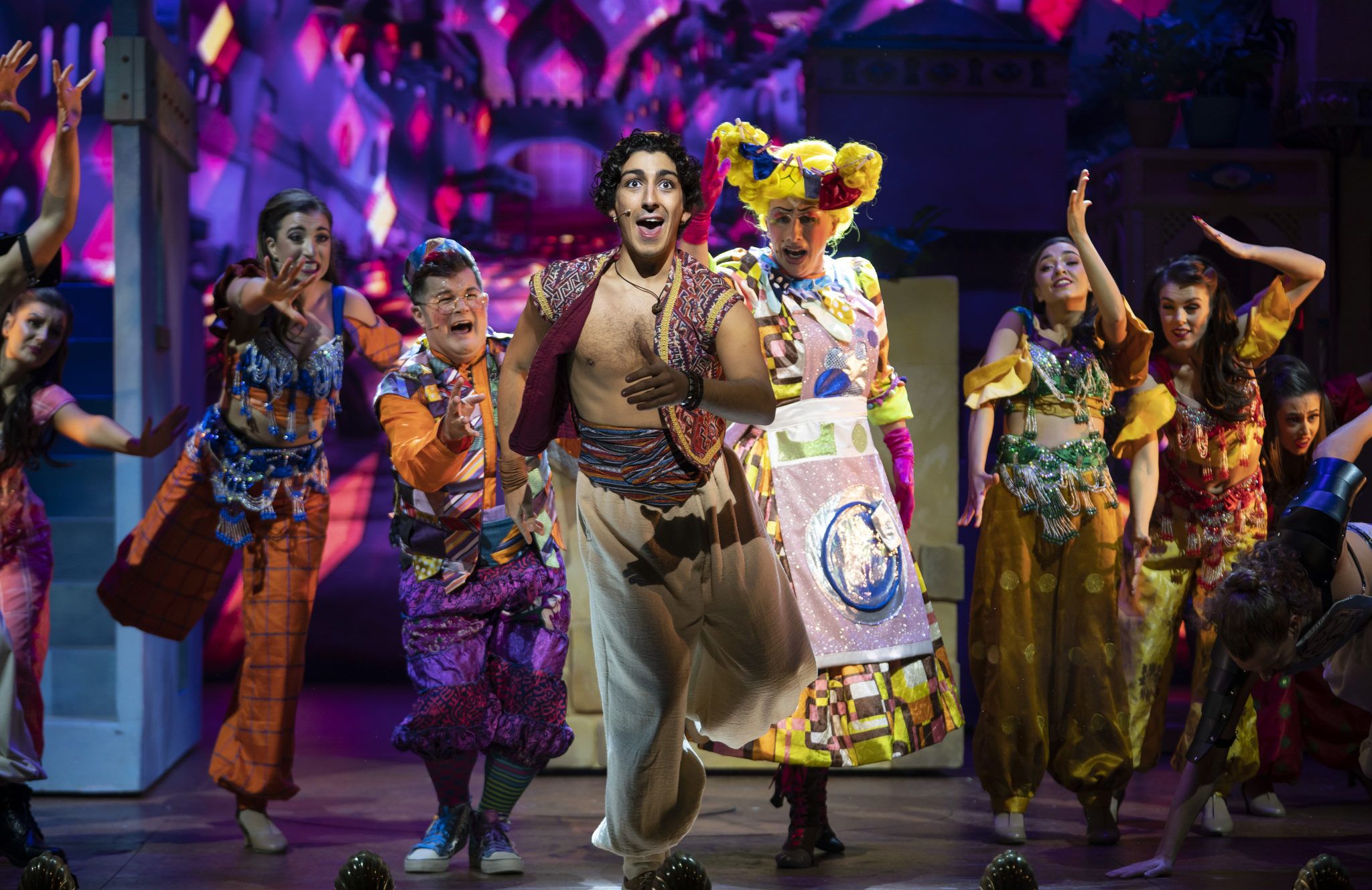 I am a Panto fanatic, clearly. I just love the work that goes into it. A different brand of work than you’ll find in a play for example. (Fight me!)

In a musical, you’ll find tap dancers who have been skipping birthday parties to train since they were five years old. Singers who have forgone the aftershow pints the night before to hit that high E in their main number.

In 20 seconds, a musical theatre performer can run off stage, moving a piece of set as they go, complete a costume and wig change as they step into a harness, while belting the Soprano line to support the chorus on stage. Musical Theatre performers are multi-taskers and there is no discipline like it.

On to the work of the Gaiety Panto 2019. I won’t talk you through the plot of Aladdin or count the musical numbers in the show. Here are my highlights and the reasons you might choose The Gaiety Panto this year.

The flying carpet is one of the most stunning visual moments I’ve ever witnessed in a Panto. I’ll admit, when Aladdin first tentatively took to the sky in Act One, I was deflated. Little did I know they were saving the real magic for Act Two, when he invites Jasmine to join him and they soar out over the stalls. A mixture of lighting, digital effects and a robust set piece creates a really breath-taking moment that children will never forget. Just when you think you’ve reached peak astonishment, it keeps getting better. (This image doesn't show the HALF of it - obvs don't want spoilers). 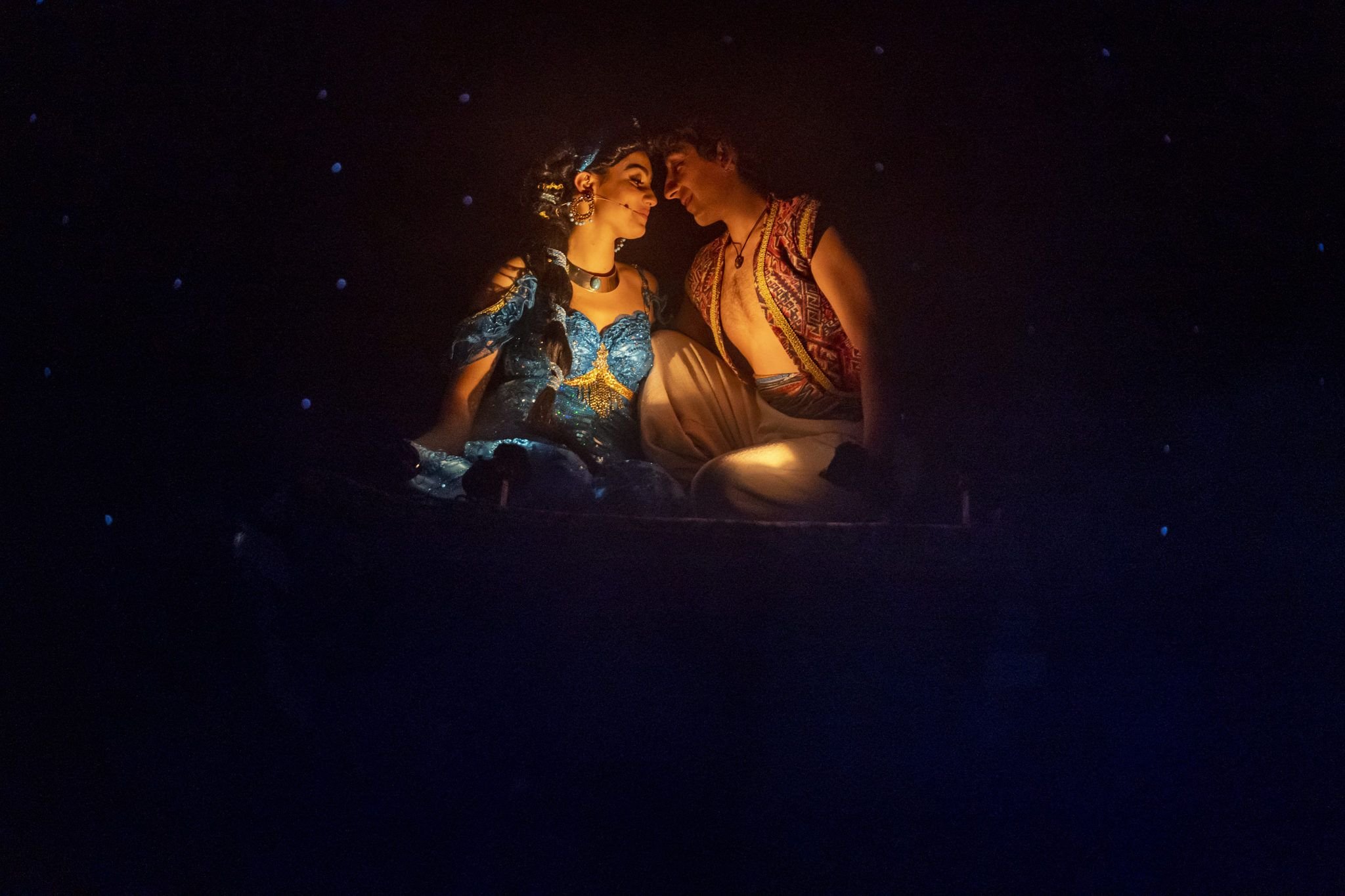 Wishy Washy and So Shy

The show-stealer for me was the unlikely duo of Wishy Washy (Aladdin’s half brother played by Michael Joseph) and So Shy (Jasmine’s Gucci-clad D4 bestie played by Linzi Cowap).

When you’re milling a popcorn and battling light-up toys, it’s easy to miss the talent powering the performance of the funny guys, the sidekicks.

Linzi Cowap as So Shy was squatting, kicking and twerking, while perfectly belting the latest chart songs, in a physical performance that would give Beyonce a run for her money. For me, her role carves out a whole new trope of Panto character. A female role who is decked out as beautifully as the princess, with gorgeous blond waves, sparkly pink accessories and a voice like a bird, but who is wickedly funny and not afraid to pull mad faces and shapes and rap and twerk with the best of them. It’s something we’re seeing more of now, but was missing when I was at Panto as a kid. Linzi really sparkles in this production. 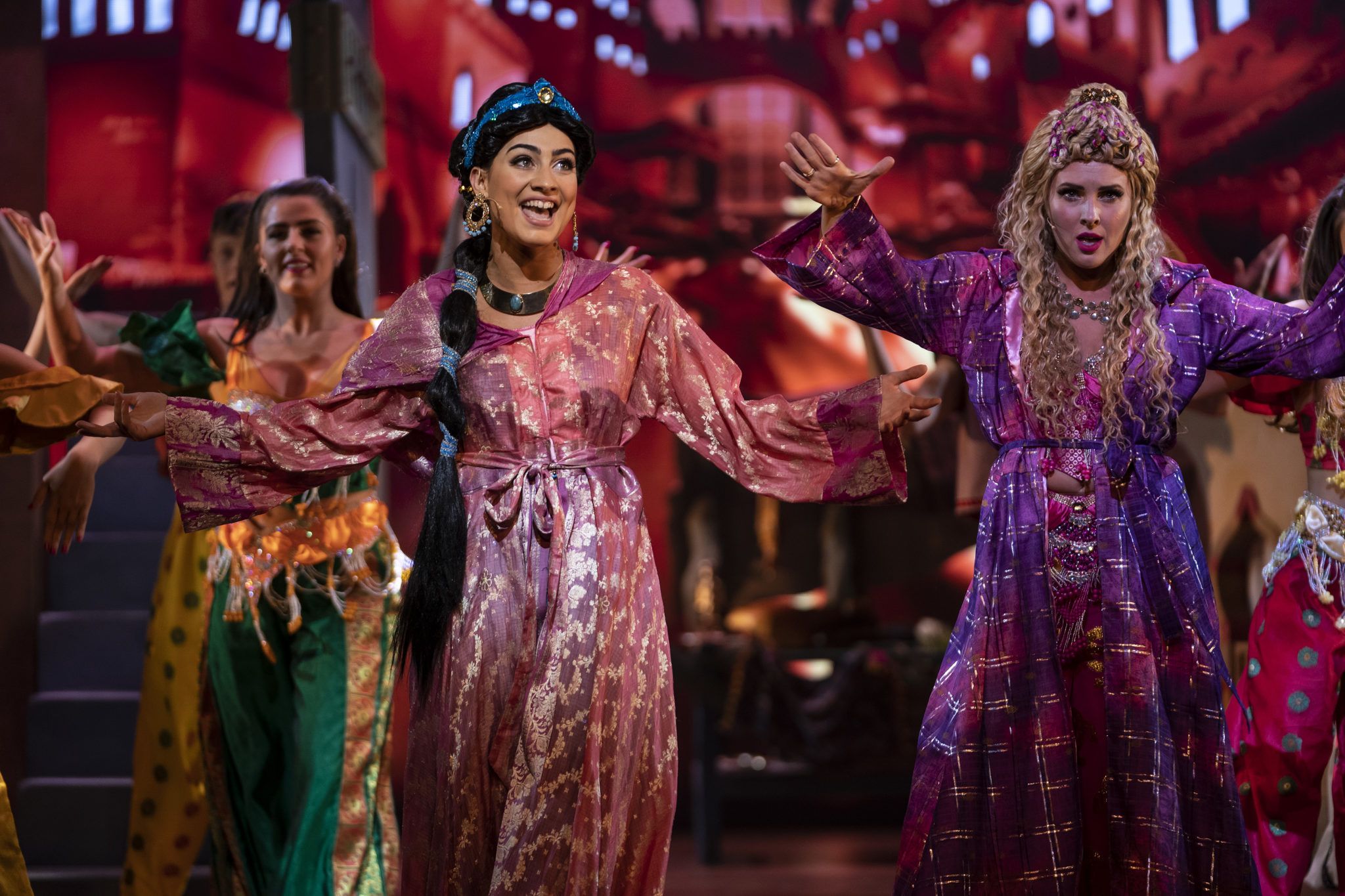 Beside her, Micheal Joseph as Wishy Washy is tasked with keeping the audience on board throughout the show with hilarious asides that foster a genuine ‘BFF’ relationship with the kids. This is no easy task and he makes it seem effortless. He performs full choreography alongside professionally trained dancers, never dropping his character for a second.

And then, the voice!

At one point towards the end of the performance, he belts a sustained note that will send shivers down your spine and remind you that this is the man that wowed the nation with his vocals in the TV series Fame The Musical in 2010. Michael Joseph, a Waterford man, has performed in every major Panto around the country, and his clear expertise holds the entire show together. When these two performed Little Mix’s Woman Like Me, I was cackling with laughter. 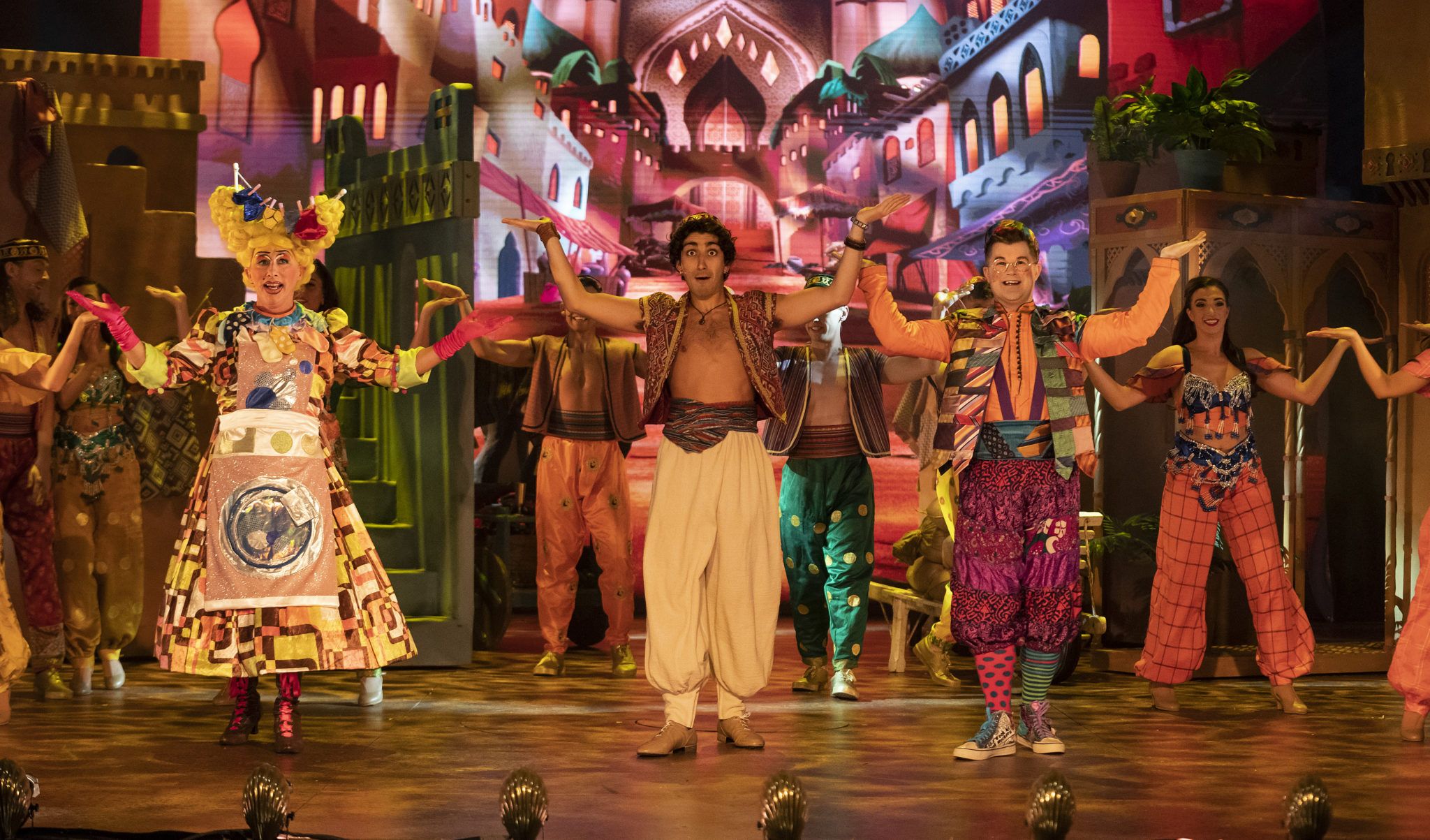 One of my favourite scenes was the Billie Barry Kids’ performance of Dance Monkey with Princess Jasmine (Suzie Seweify). The choreography is slick, with the BBKs showing what they’re made of having delivered at least three genres of dance styles to perfection by this stage in the show. They don’t miss a beat and these kids are a prime example of the hard work that goes into making a performance appear effortless. You can tell they are having fun and are best in class as always.

Norman Payne’s Genie was another stand out for me. The joy of live theatre is that things can go wrong. Minor sound issues never shook this pro on press night. His booming vocals rang around the theatre even when his mic let him down, and his characterisation visibly pulled the kids into his storyline and made him one of the most important plot elements in the narrative. 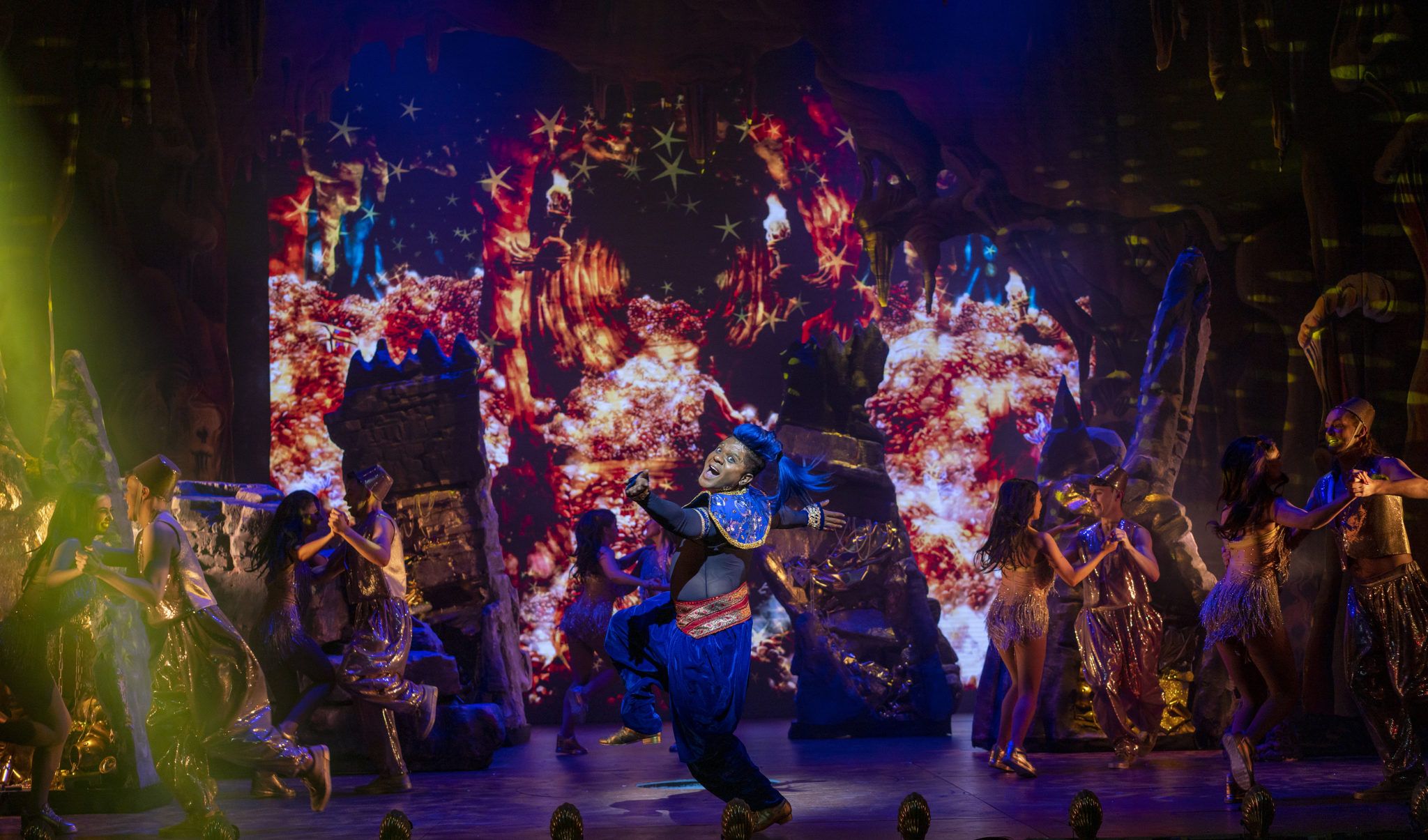 While I found last year’s The Snow Queen a little on the convoluted side when it came to plot and characters, this year the story is told seamlessly with each character having a clearly identifiable purpose in moving the narrative forward. It’s meaty enough to keep the adults involved, and simple enough so that the kids won’t be restless.

If you are looking for a glossy, magical Disneyesque production, choose the Gaiety where you can sit back, relax and leave your evening in the hands of a team of true professionals.

The work that goes into this Panto is no laughing matter and this is one of the most visually spectacular pantos yet.

Aladdin at The Gaiety Theatre has been extended until January 19, tickets available here.