Ducking into Le Perroquet on a drizzly Wednesday afternoon in September was a bit like stepping into the Woody Allen movie Midnight in Paris where protagonist Owen Wilson stumbles back and forth in time between present day Paris and the roaring Paris of the 1920s.

The dining room of Le Perroquet provides both time travel and geographical travel, seeming to transport us to a bustling brasserie in Montmartre or Le Marais. French pictures and tchotchkes abound on the walls and shelves of the lively and cozy yet plush room. Ricard bottles and jugs line the bar and the last film of French comedian and mime artist Jacques Tati, Parade, plays on a wall-mounted TV.

We sit at the bar as even midweek and a month into opening, the place is full at 1pm. Usually I am allergic to eating on a high stool, I find it so hateful that it practically negates the pleasure of the eating but in fairness to Le Perroquet the bar is a comfortable as any of the tables and provides a good view of the action. Restaurateur and sometime-TV star, Nick Munier, who is co-owner and the consummate host, bustles among the tables clearly loving being back in the fray after the abrupt closure of his last venture Avenue in Temple Bar in 2017.

The vibe at Le Perroquet is relaxed atmos and high-end small plates. The French influences run from the aesthetic to the flavours and even extend to an all-French wine list. As is de rigueur in many places now, there are no starters and mains just small plates and sides. At lunchtime there is a very good express menu offering exceptional value: two small plates with one side and a house wine or cocktail for €16. We opt to try the express lunch and also to sample some plates from the a la carte menu.

Food arrives as it is ready in Le Perroquet which sets a nice pace for the meal and sets a nicely informal tone for the experience as a whole. We share everything kicking off with the rillettes of smoked mackerel served with crispy croutons (which we could have done with a few more of) and a grilled spring onion which provided the perfect foil for the slightly tart fish. With that came the goat’s cheese salad with plump fresh figs, pickled apple and candied walnuts. Overall a very nice rendition of this kitchen stalwart, though for €7 on the a la carte, it’s steep enough for what amounts to barely more than a handful of salad. Both came from the express menu and along with a side of succulent chunks of crispy chicken with a tangy ranch dressing made for a satisfying lunch. 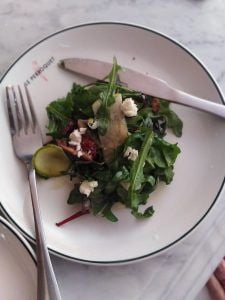 While the express is evidently very good value, our selections from the a la carte stole the show. Plates are priced from €4.50 to €14 and true to form, I chose the two most expensive options. The roast lamb leg came with tiny crispy potatoes, shards of seaweed, pickled beetroot and a moreish jus. The lamb was perfect, tender and pink while the sweetness of the beetroot and intensely savoury crunch of the seaweed provided excellent contrasts in the dish. 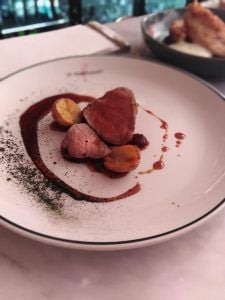 Our final small plate was the monkfish (Sidenote: I was coming to resent the smallness of these divine small plates – though within the context of the entire meal the portions are actually pretty well-judged, leaving you neither wanting nor painfully stuffed). Served with sweetcorn and tarragon, the fish came in a curried sauce as delicate as a beurre blanc with well-judged spicing, I could have eaten three more of this exquisite plate. 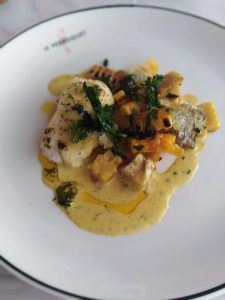 There are three desserts and a cheese plate to choose from for afters. Naturellement, we practically lunged for the strawberry and ginger mille feuille which was perfect, light layers of flaky pastry, sandwiched with a velvety, ginger-infused crème patissiere accompanied by fresh strawberries with a sharp sorbet nicely lightening up the plate. The other dessert, simply called Le Perroquet Cinema, was a plate made up of toffee popcorn, panna cotta, crystalised ginger jellies and chunks of caramel fudge. On paper, literally all of my favourite things heaped onto a single plate, in reality, I felt there was ever so slightly too much going on here and in fact the simplicity of the mille feuille really shone in contrast. 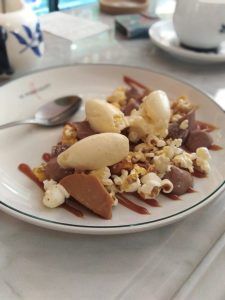 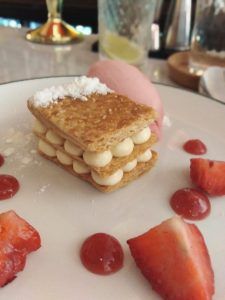 Over all, Le Perroquet is a brilliant addition to Leeson Street’s culinary stretch. You could find yourself handing over serious cash for these serious eats but providing such a keenly priced lunch menu is a great strategy if you think about it –now that I’ve tasted what the kitchen is capable of, I won’t resent shelling out on pricey small plates from the a la carte at dinnertime when I inevitably go back for more.

Who killed Elena in The Undoing? We go through all of the suspects

Dublin's newest pop-up bakery has opened at The Fumbally Stables

Not one but TWO Mrs. Brown's Boys Christmas specials coming this year