Welcome to my weekly guide to live comedy in Dublin. Netflix is great and everything but you can't beat the real thing, here's what's happening this week in the fair city.

Cherry Comedy celebrates its fifth Birthday in Whelans with a brilliant line-up including Damian Clark, Fiona Frawley and Kevin O'Sullivan! Tickets are a fiver from Whelanslive.com or on the door.

If improv comedy is your buzz then head over to The International Bar on Wicklow Street, where the show starts at 9:30pm and it's a fiver in.

Upstairs in The Woolshed Bar on Parnell Street is The Comedy Shed where you will find Father Ted star Kevin Gildea and Owen Colgan of Hardy Bucks fame this Monday. It's hosted by Joe Dowlin, 8:30pm. Free Entry. 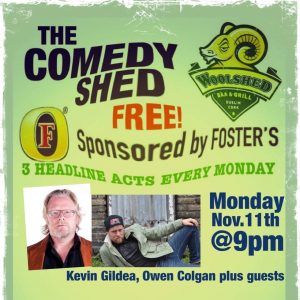 The Comedy Crunch, Stag's Head, 9pm - The very best in stand-up with the comedic powerhouse that is John Colleary (RTE's The Savage Eye, Irish Pictorial Weekly) & special guests on Monday night, while Tuesday night has Michael Rice, Ger Staunton, Marise Gaughan and more. Plus there's free ice-cream and it's PWYW (Pay What You Want) too! Sorted.

The Comedy Cellar in The International has Jim Elliott, Shane Daniel Byrne, Darach McGarrigle and hosted by Davey Reilly, 9pm. Tickets are a fiver at the door. 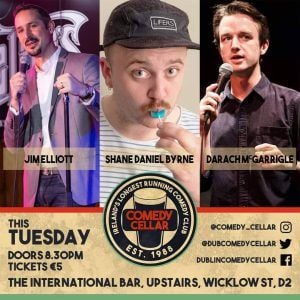 Anseo Comedy Club has Australia's Daniel Muggleton (whose TV special has just aired on ABC Comedy in his home country of Australia a few days ago) plus Simon O'Keefe and Seamus Stackpoole. Tickets are free and you can reserve them on Eventbrite.

Riff Raff Comedy Club has a weekly secret line-up in the basement of The Chelsea Drugstore on South Great George Street and it's always a belter of a night in there. It starts at 9pm and it's PWYW (Pay What You Want). You can reserve seats for this show on Eventbrite too as it packs out weekly.

The Comedy Cellar in The International has Edwin Sammon, Emma Doran and Gerry McBride. Hosted by Davey Reilly at 9pm. Tickets are a tenner at the door.

Eddie Izzard is back with four Irish shows, including three nights at The Olympia Theatre, with his new show Wunderbar - a delicious insight into the surreal and fantastical world of Eddie Izzard. This is an intelligent Bunkum of the highest order. Five years after his last comedy tour Force Majeure made comedy history having played 45 countries, all 50 US states and in four languages, making it the most extensive comedy show ever, Eddie is back to his roots with an all-new rather personal show which expands on his own very unique, totally surreal view of life, love, history and his ‘theory of the universe.' 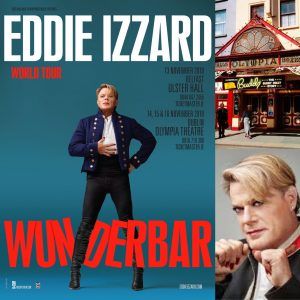 Eddie said: "It is getting close to the time when I have to go off for a while to have a political life. But before I do that, I want to keep giving audiences around the world the best stand-up comedy shows that I can – especially at a time of Brexit-hate and Trump-hate. My new show is about everything from humans over the last 100,000 years to talking dogs and animal superheroes. I am looking forward to coming to see everyone again."

Tickets priced from €49.65 online or by calling Ticketmaster and or call The Olympia phone bookings. Just a heads up, there are only single tickets available for Friday and Saturday shows.

Dublin's largest weekly comedy venue brings you another stellar weekend of live stand-up with their 'BEST OF IRISH' line-up including Ireland's favourite adopted Irish Aussie Damian Clark (RTE's 'I Dare Ya', Electric Picnic), Rory O' Hanlon (Edinburgh Fringe Festival, SKY TV), Steve Bennett (Irish Comedian of The Year Winner) and the weekend will be MC'd by yours truly. Shows start at 8:30pm and tickets are available from laughterlounge.com from €26. They do deadly group deals as well so drop them an email if you have a gang of pals or a work crew looking for a great night out! The Laughter Lounge has soundly offered a discount code for all you Lovin Dublin readers - if you Enter 'DANNY20' at checkout when booking online and it'll knock 20% off tickets for you! You're welcome.

The Comedy Crunch at The Stag's Head is finishing off the week of comedy in Dublin strong with an all-star line up featuring John Colleary, John Spillane, Darch McGarrigle and hosted by my good self. Sundays here are super busy so get in for 8:15pm to get the best seats, free ice-cream too and it's PWYW (Pay What You Want). Show starts at 9pm.