Picking the best coffee in Dublin is pretty tough even if in general the average standard in the city is pretty shit. Once you discount the big buckets of piss water that most of the chains serve you are left with a handful of good independent places but the really tasty stuff is as had to find as a straight politician in the Dail. The problem with something as subjective as coffee is that there is no right answer and everybody has their own favorite. It's the one thing that can put a smile on your face on a cold January morning and people are passionate about the best brew (share yours in the comments below) to a point where I genuinely think coffee could become a religion. In my mind there can only be one winner...3FE. The place is a fucking Mecca to the black stuff and I've never had a bad cup there. Add in the fact that it is the only place in the city that reminds me of my two favorite cities (SF and Berlin) and this is an incredible experience. 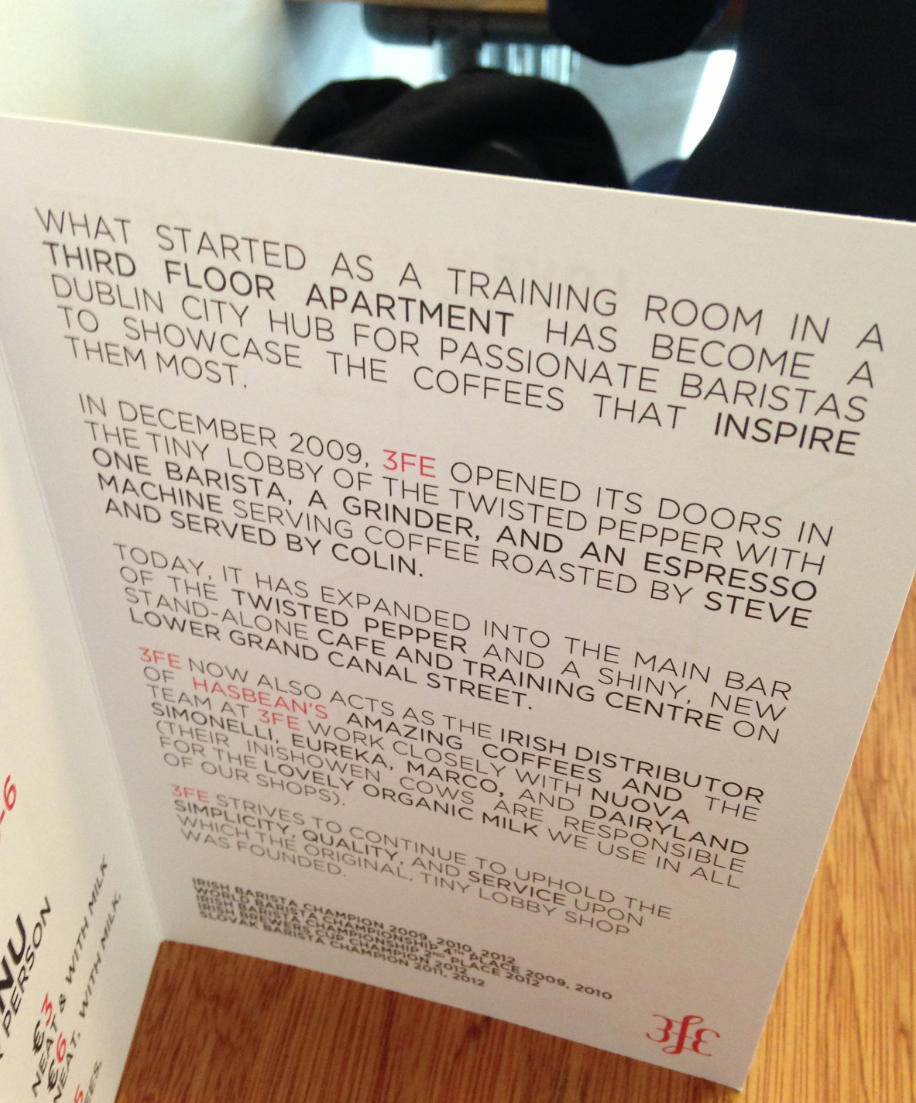 In fairness it is a little off the beaten track unless you work in the docks but the stuff they serve here is well worth a detour. The room is seriously cool with industrial design and a minimilist look. It's always full of designers, developers and smart looking foreigners on their way to work in Facebook and Google. Pull in here for 5 minutes and you'll nearly feel like you are in another country. They serve food here but it is nearly an afterthought because the coffee is why most people come. I had a Moroccan sweet potato soup with Tazaki which was delicious if not mind blowing. Sounded better than it was. My sambo was an interesting combo of salted beef, cabbage, melted swiss cheese and homemade 1000 island dressing. A real success packed full of flavor. 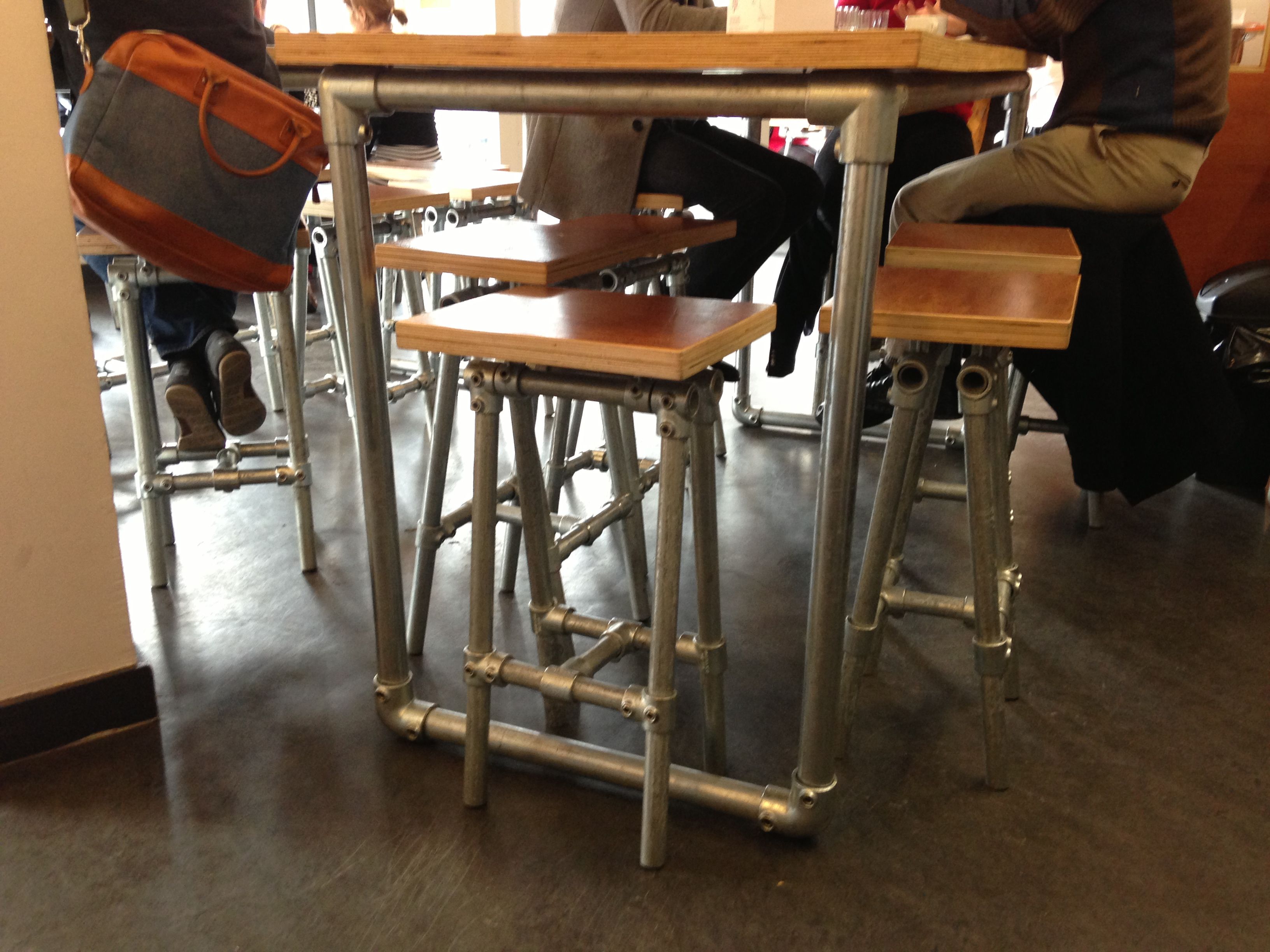 As you can see from the vision above coffee is a passion for this company and that comes through with every sip you take. I walked out with a feeling that I could conquer the world and that my heart might stop pretty soon because it was racing so much. You could stand your spoon up in the cup it is that rich and syrupy. Everything you want from a cup of coffee. As you can see below they even have a bunch of tasting options and a trio of coffees which is probably a little too much for me but no doubt the guys are passionate. It doesn't ever seem as busy as it should in here. If they had Starbucks style budgets and plopped themselves on Dawson or Dame street they'd be queuing around the fucking block. This is absolutely savage coffee with decent food options and I urge you to take a detour down here to try it out. Everybody will have their own answer to the best cup in town question but if I could only have one last coffee before I died I'd be heading down to 3FE because they never ever let you down. Incredible. 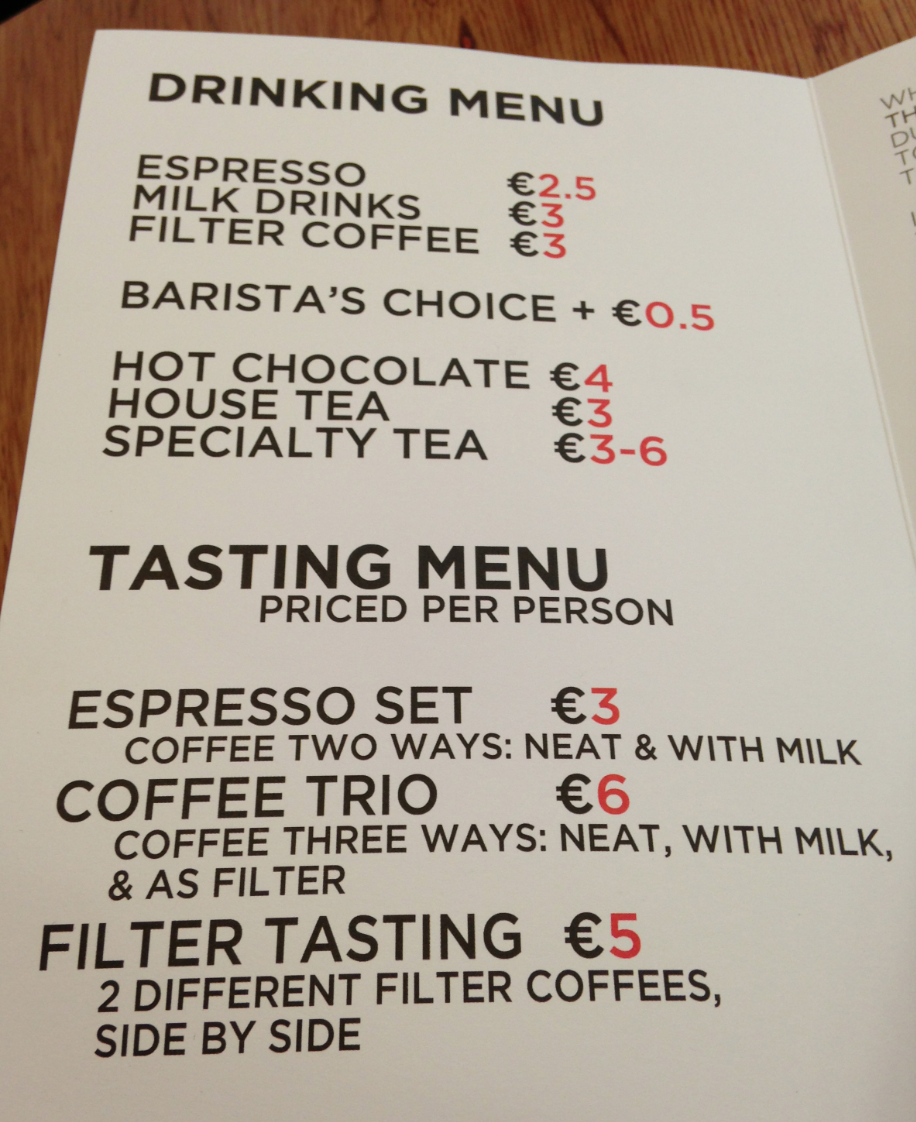 I am only one person eating in the place on one day so to try and share more balance and highlight other blogs here are some other reviews...
Sour Grapes
Cafe Rationale
Joseph Mcnamee
The Cook's Belly
Brigestone