"These enterprising kitchens are reshaping just what we think of when we picture the vegan diet."

The recent influx of vegan cafes in the capital means that I have decided we need a proper name for these trailblazing plant-based purveyors. I’m currently workshopping Vegaterias vs Veganeries but they both, unfortunately, sound oddly like medical terminology. I’ll keep working on it. In the meantime, these enterprising and kitchens are reshaping just what we think of when we picture the vegan diet.

The Dublin vegan scene (we have a “scene” now — personally I feel incredibly cosmopolitan though I am concerned about what this will spell for the housing market) has given the traditionally virtuous vegan vibes a down ‘n’ durty glow up. The folks behind Veginity have made a name for themselves with their “vish ‘n’ chips” while the kitchen of The Carrot’s Tail in Rathmines have devoted themselves to vegan versions of some of our carnivorous faves. 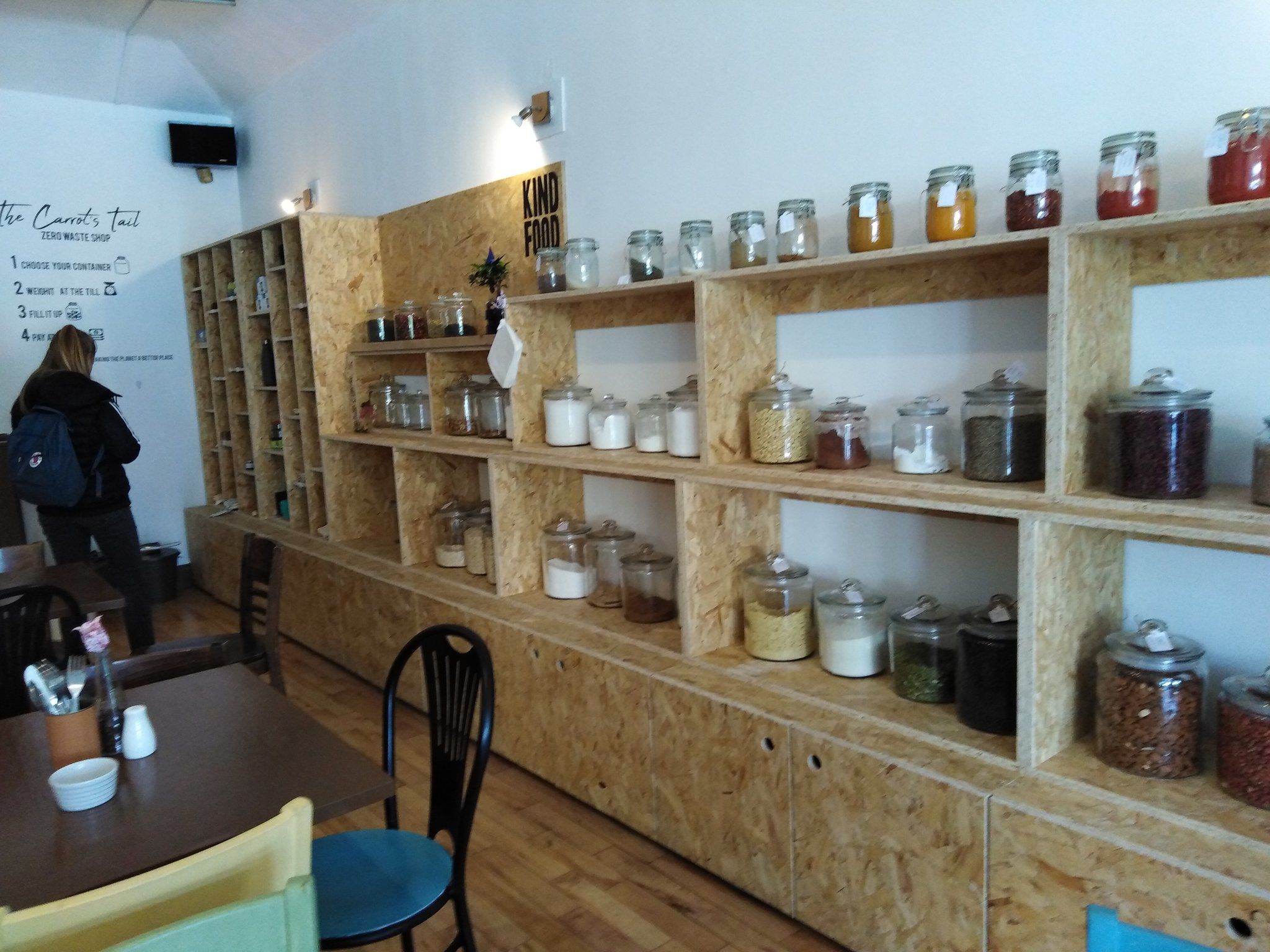 Owners Sebastian and Yeniree are creating an impressively accessible vegan experience in a huge space that perfectly blends a chic, slightly industrial vibe with nice vintage touches – think clusters of couches in which to lounge surrounded by framed prints and wall graphics by Yeniree herself who was previously a designer. Her striking doodles are dotted about the walls – “Tofu Never Screams” proclaims a cheery chunk of tofu skewered on a fork above the door to the loos. 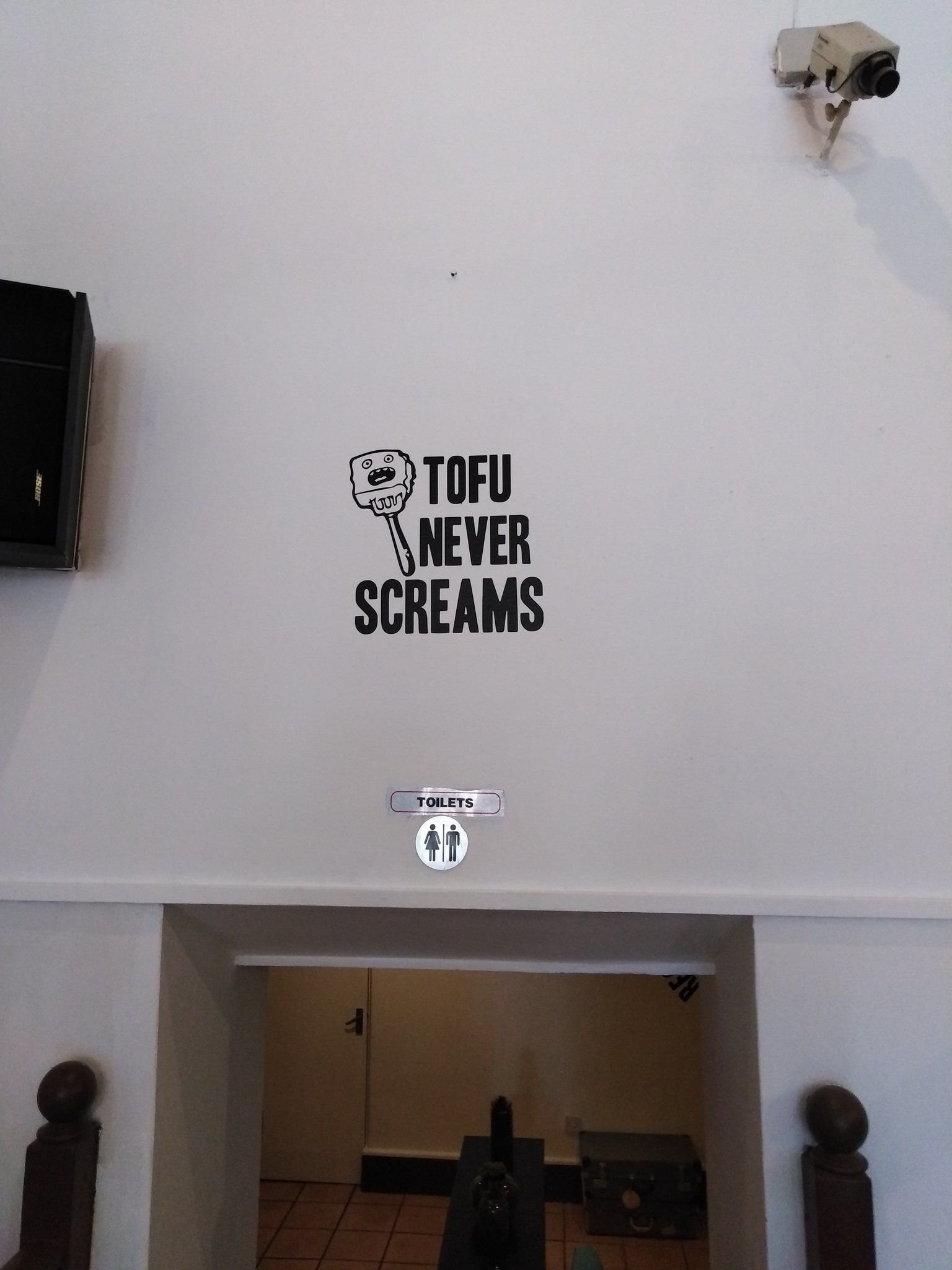 Shelves of textured plywood run the length of the main café space, where glass jars display ingredients and one can browse The Carrot’s Tail Zero Waste Shop. There are homewares for sale and reusable boxes and containers to use for takeaway lunches. Along the opposite wall is the counter featuring gooey cakes, bright salads in the deli section and the imposing coffee machine, behind which the droll and charming Sebastian runs banter and interference between customers and the kitchen.

Beyond the main space is a series of smaller rooms, each with a slightly different mood. In the first, rugs, cozy armchairs and tables are grouped around an original blue tiled fire set into a bright orange chimney breast boasting wooden animal heads mounted above. Conversely, the next room is airy and sparse with a bleached wood-paneled wall and green plants spilling from wooden notches. Beyond is the sunny courtyard with generous seating, perfect for a lazy Summer brunch. 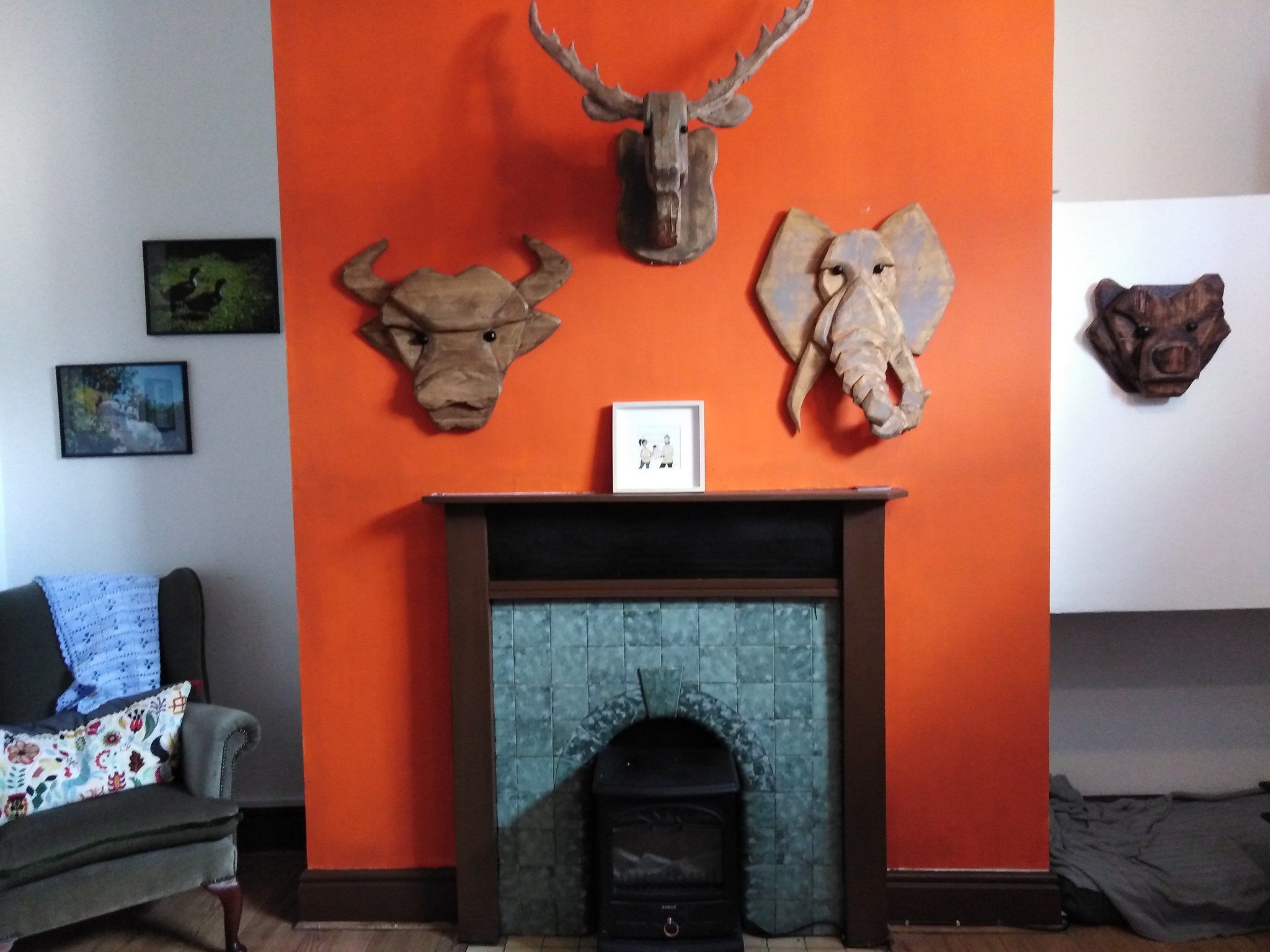 Lunch at the Carrot’s Tail features lots of familiar plates, so much so that meat-eaters should feel fairly at home here. There’s a steak sambo, a “chikon” burger and a meatball and mozzarella sub. There was also soup and salad on offer but frankly I was deeply intrigued by the meatball sub. When the Carrot’s Tail crew confessed their passion for the chikon burger, I sternly informed the husband that he was having that. We grabbed our drinks – ginger and lemongrass kombucha for me, a jazzy lemonade for the husband – and made our way to the sun-soaked yard out back.

The plates arrived and we immediately set about meticulously butchering and dividing the burger and sub so that each person had exactly half of the juicy and moreish sambos. The fried chikon is a thick slab of crispy fried tofu that feels like it shouldn’t work but totally does. The texture is spot on, meaty and filled with a deeply savoury flavour, apparently achieved by repeatedly freezing, de-frosting and re-freezing the tofu then soaking it in stock before frying.

The labour-intensive dishes are a testament to the commitment at The Carrot’s Tail. Nothing is a straightforward “bang it in the oven” job, every process and ingredient requires the proper consideration. Is it cruelty-free? Is the practice sustainable and sympathetic to the environment? Plus is it tasty? The chikon burger is indeed tasty. The toppings were the classics: iceberg lettuce, tomato, pickle and a slice of vegan cheese in a soft, seeded bun and a side of nicely rustic thick cut fries finished the plate. 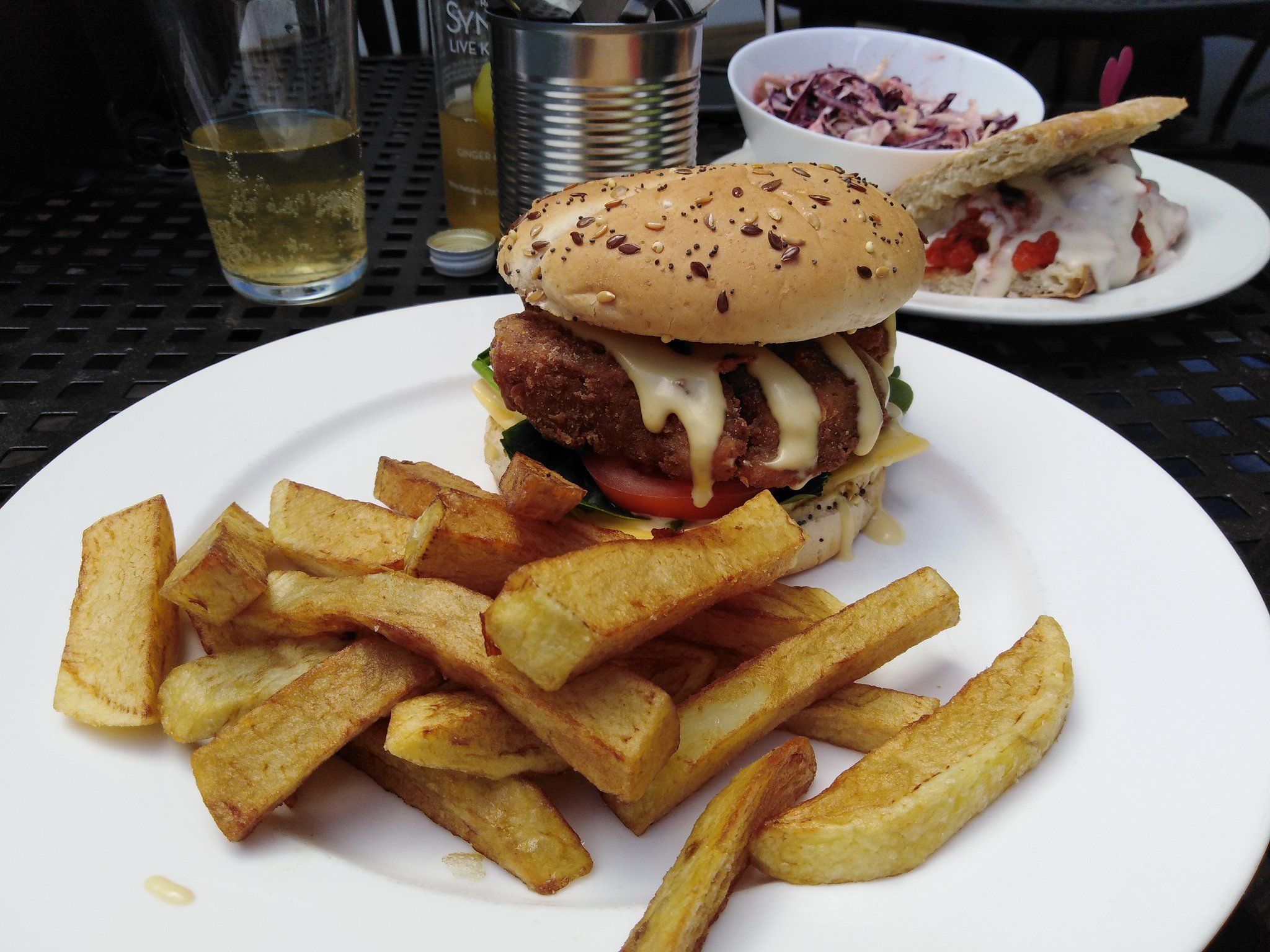 The meatball sub was another impressive plant-based work of vegan wizardry. It verges on insulting to describe the herby, immensely satisfying plant-balls made from soy and red beans as a near spot-on approximation of meat because beyond being a very good dupe of a pork meatball, they were simply delicious in their own right. Slathered in housemade melted mozzarella (a secret bit of alchemy involving cashews) and tomato sauce in a toasted sub with a side of bright crunchy ruby slaw – it was a gorge-fest. 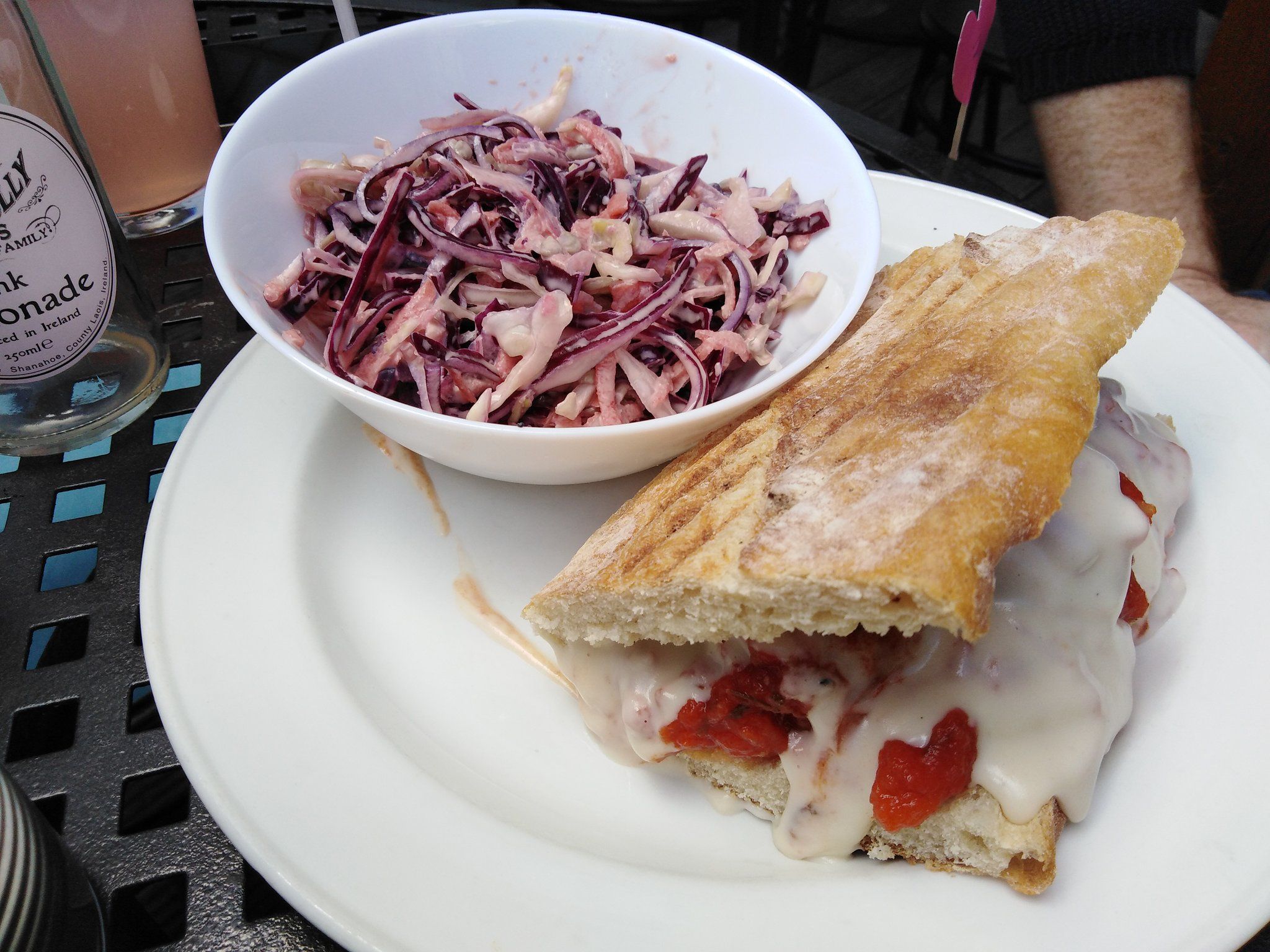 Dessert was the epic snickers cake that had made eyes at me earlier as I was ordering. It arrived on a plate that seemed barely equipped to contain its lush caramel frosting. Moreish and mega are the only words to describe it and I do not have any grá for vegan confectionary ordinarily.

I know that may seem an unfair generalization but usually I find vegan efforts in the field of sweet things to be disappointing, date-infested energy balls that more closely resemble little dehydrated shites than anything to do with cake. Not so with this sweet feast however, for starters, it had no visible date-involvement whatsoever – an achievement in and of itself. And it had a very moist, light texture – again not always the case with vegan baking. Two very good cups of coffee rounded off an enormously satisfying meal. The vegan element was, to my mind, largely secondary to the fact that The Carrot’s Tail is simply producing very tasty, colourful plates full of invention and care. 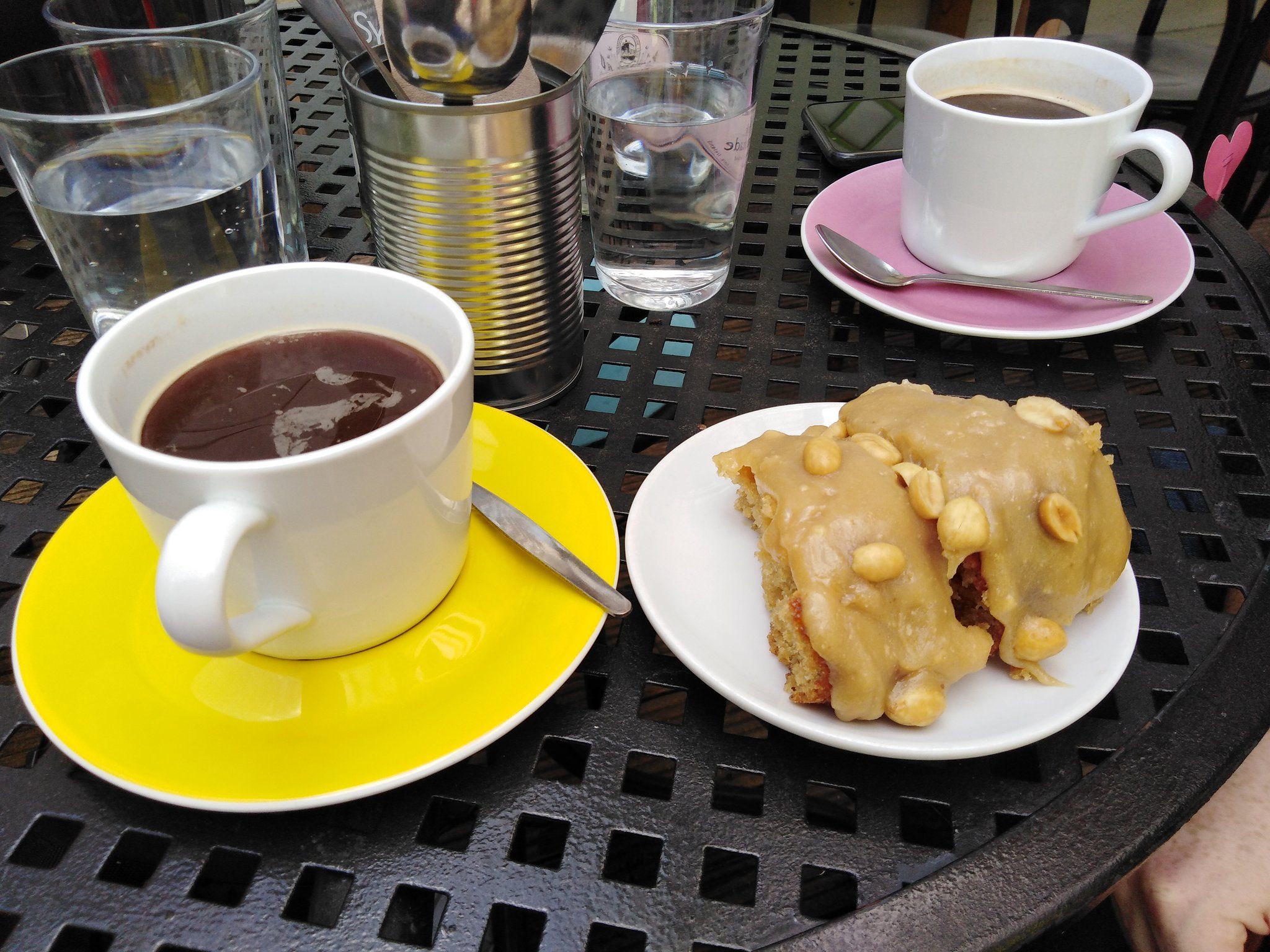 Before we left, I had a sneak peak at the brunch menu and was instantly fascinated to learn that they serve vegan salmon aka zalmon. I had to know. What… just WHAT… could that even be?

We all have something holding us back from veganism. For some committed carnivores it’s veal and foie gras and, sure, they’ll probably gorge on death until the day they die but for the rest of us it’s often less MEATY pleasures that give us pause. No more bacon sandwiches. Saying goodbye to sausages. Or, for me, it was letting go of smoked salmon. And here now, appearing before me like a cruelty-free mirage was Zalmon. I took a bite and was momentarily thrown by the salmonish sorcery taking place. It was a piece of carrot. I knew this on academic level but my mouth and my heart were confounded. It was EXACTLY like salmon. Slow cooking, liquid smoke and nori sheets are the vegan incantation required to produce what is essentially tantamount to plant-based transubstantiation.

After my visit to the Carrot’s Tail, I’ve sussed what we’re calling the new revolution of plant-purveyors in Dublin. It’s Vitchcraft!

These were the most popular restaurant kits during lockdown