Hundreds of people have gathered on O'Connell Street to take part in the Extinction Rebellion Ireland protest this Good Friday afternoon.

The demonstration is part of a Europe-wide campaign to bring attention to climate change issues around the globe. Similar protests have led to several arrests in London this week.

The organisers hope to disrupt 'business as usual' in a bid to draw attention to the issue. People started to gather at the Spire on O'Connell Street at around 1pm. 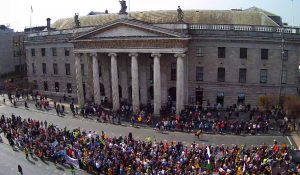 You can see for yourself what's going via the Carroll's Irish Gifts webcam available here.