Dublin airport has responded to a video posted by European Election candidate Gemma O'Doherty in which she criticises the multi-faith room on its campus.

O'Doherty posted a video in which she claims the room lacks crosses and an altar and also says that staff were rude to her when she raised the issue with them.

In a Twitter post, O'Doherty says that 'Irish people own the airport' and added that DAA chief executive Dalton Philips banned her from filming.

Dublin Airport has since responded to say that 'there is also a Catholic Church on campus and told Gemma that she had been banned from filming for three reasons, as follows:

'a) you had not sought or been granted the required permission to film at the airport b) we do not permit political campaigning on the airport campus c) all mobile phones and devices should be switched off in the multi-faith room.' 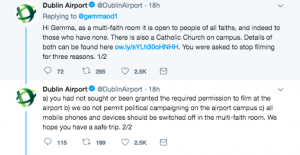 The airport concluded by wishing Gemma a safe trip.

READ NEXT: REVIEW: One Society – “Excellent Formula of Familiar with a Side of Imagination”