Pasta is like a religion to me. When I worked on boats I spent a good 2 years of my life combined in Italy which I consider to be the greatest country on the planet. Yeah sure they are often said to be as crooked as hell and their prime minister hosted Bunga Bunga parties with 17 year old hookers but they know how to live life well. I like to think of Italians as basically better looking versions of us Irish who don't need to have 10 pints to have the craic. Apart from a few subtle differences, we are essentially cut from the same cloth. It is no coincidence that 3 of my top ten favourite places to eat (Di Mimmo, Bernard Shaw And The Fumbally) have a healthy dose of Italians both cooking and serving the food. You see food for Italians isn't just about eating it; is way more than that. For them it is nearly as important as life and death and nothing more so than a plate of pasta. Pasta is eaten in every corner of the world. By students, bankers in high end restaurants or as a salad in pretty much every shop or deli in town. The problem with it is that it has been bastardised to within an inch of its life. Good pasta is as hard to find in this city as it is to get an honest answer from a Rehab Executive. Luckily I have a secret spot that I eat in about 3 times a week that does pasta that not only is the best in Dublin but which would also grace any family table in Italy. Pinnochios has a simple menu and is packed full of locals and brilliant lively Italian staff and most unusually is right underneath a Luas stop in Ranelagh. There are far trendier, more sexy restaurants in the street but the real foodies will know what they are experiencing when they eat here.

Take the Ravioli in the photo below with spinach and ricotta and a simple tomato sauce. It was so good that I finished the plate and ordered it again. Who even fucking does that? I've not done it before and it wasn't anything to do with being hungry but I simply had to order another plate of the dish. It was that good. I needed that taste sensation in my mouth again. 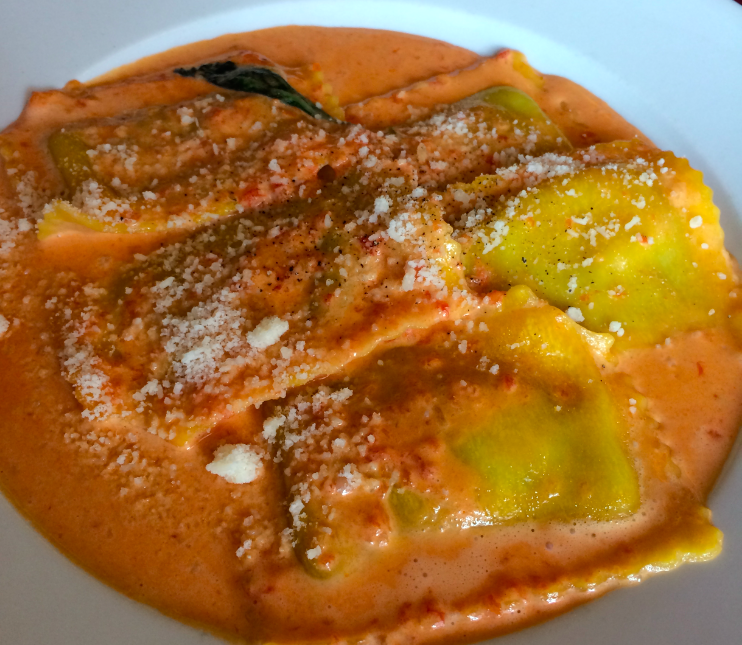 I know people give out to for me having a bias towards Ranelagh (that is changing, if you look closely) but the place is Dublin's foodie heartland and I happen to live here. Of course I'm more likely to eat on my own doorstep, and fear not, I am heading to DNS for my next 2 reviews! Wherever you live though in our little city this place is worth the trip and it won't cost you an arm and a leg to eat here. It's one of the unusual places that I would suggest for lunch rather than dinner. It just has that lovely daytime vibe and regular punters that only a quality Italian bistro has. Don't order anything else other than the pasta because to miss out on that would be a travesty. You might even have a second plate.