Storm Ciara is wreaking havoc around the country and has confined most of us to our homes on this wet and windy Sunday.

Spare a thought though, for BBC Northern Ireland reporter Sara Girvin who braved the insane Storm Ciara elements in Dublin this morning while the rest of us were tucked up in our beds.

It didn't seem to bother Sara that much as, ever the professional, she carried on regardless, even though in her own words she looked like a 'drowned rat'.

The most impressive thing is, Sara wasn't even reporting on Storm Ciara and was in fact delivering an update on the General Election. You'd think the BBC would have let her do that from somewhere warm, as many people pointed out in the comments. 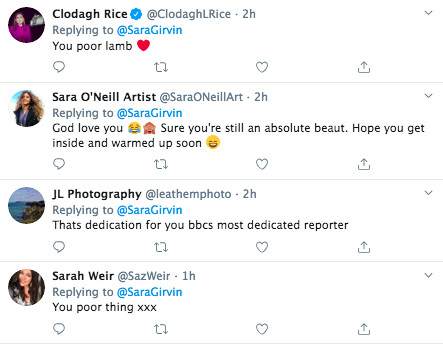 In the end, Sara didn't seem to mind too much and you have to admire her putting on a brave face while reporting in some of the maddest weather we've seen in Dublin in quite a while.

Trying my best to make the #IrishGeneralElection #StormCiara crossover a thing today in Dublin. If you don’t have to be outside today, don’t! Hoping everyone stays safe and dry ☔️ pic.twitter.com/8tIyck1RuX

Let's hope she's curled up on her sofa with a hot chocolate before too long. As for Storm Ciara, it's already caused cancellations at Dublin Airport and with a snow warning due to take hold tomorrow, it looks like things will get worse before they get better.

Stay safe out there.