Choosing where to eat is often a challenge.

As you can imagine being the food-head in Lovin Dublin means I get multiple questions daily about the best places to go for drinks, a quick bite, a date and everything in between.

There are some amazing spots in the city and I always love to try new places but I have a little list of reliables that I go to when I'm brain dead and uninspired. These are places that are super casual, unfussy, not too pricey and most of all, dependable.

These are the popular go-to places that most people in Dublin have visited, they're not 'hidden gems', they're just good 'ol humble spots that are always delicious.

I haven't added a place to this list in a long time, until this week.

My friend and I had a short window to grab some food in town before a gig. Of course, I wanted to keep it central and stress-free so I decided to pick somewhere in the South William / Drury Street area. As I flicked through my brain I realised that a new Mexican-Korean-fusion joint had opened up that I hadn't tried yet but had heard lots about.

Will you be my Valentine??? 💕👬👫👭 For those of you who forgot to make a reservation on this valentines day 😳🙄we have walk in space all evening 🌹💋 Opening Times: Sun-Wed 12 - 20pm Thur-Sat 12 - Late See you soon Chicos and Chicas

My friend and I walked in and had our pick at where to sit (first green tick from me) and decided to sit at the window.

The venue is pretty roomy and very bright with a calm and collected atmosphere.

Unlike most places where you're crouching over an uncomfortable stool and onto a thin counter with barely enough space to put a coffee cup down, Juanitos window was lined with bold yellow swivel chairs like you'd see on The Sims and large wooden countertops decorated with cactus', real ones I might add - no IKEA job done here!

The window was the perfect place to people watch and we did exactly that as the meal continued.

We started with a cocktail, I presume they only have their wine licence at the minute because I was HANKERING for a Margarita but there was only wine cocktails on offer (I'm sure this will change over the next few months!). The cocktail was surprisingly tasty and refreshing and made me forget about my tequila dreams in an instant with bursts of passion fruit and fizz.

We were off to a great start. 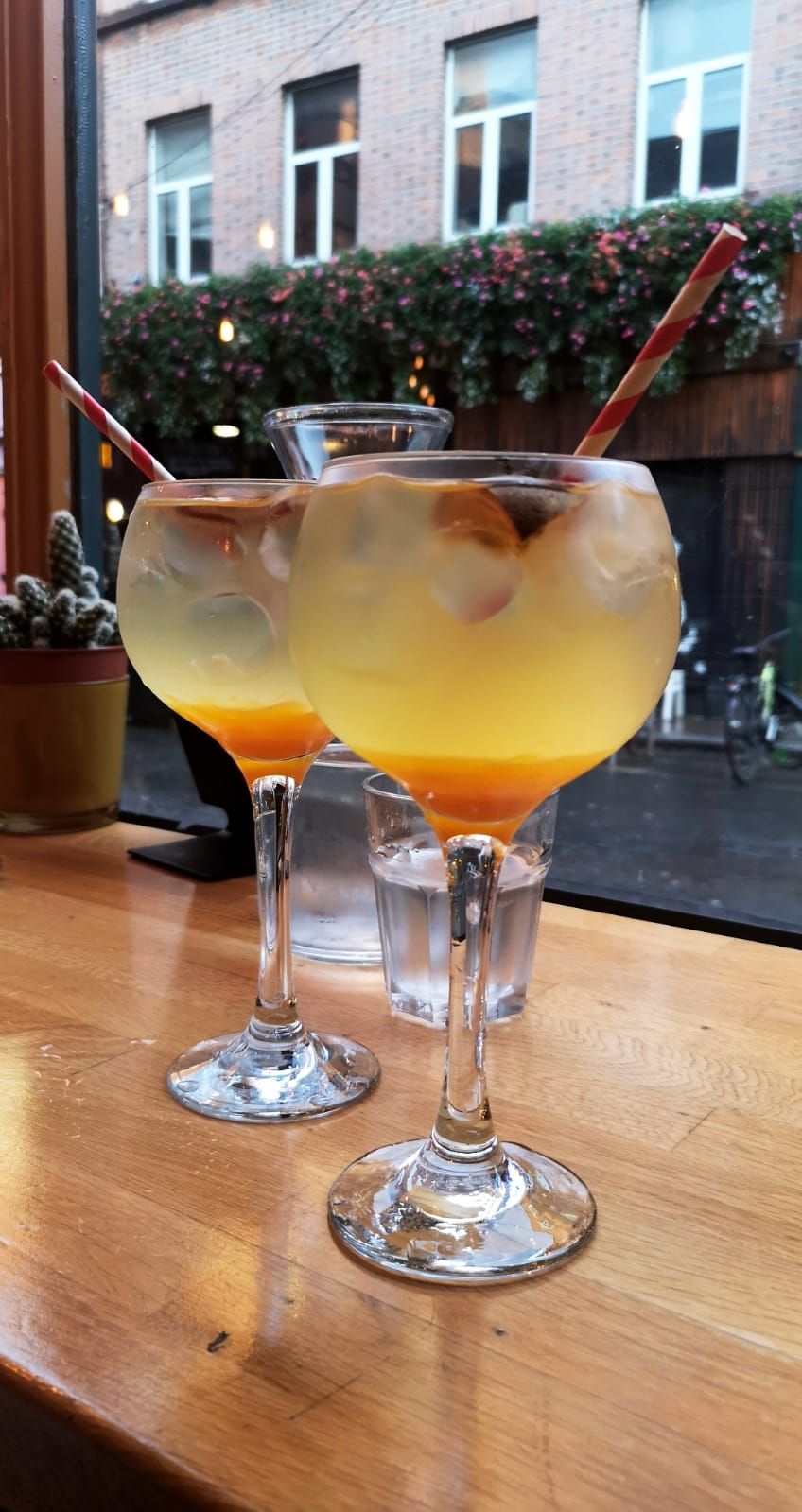 The menu was different from any other I've come across in the city. Taking influence from the LA Street food scene, it offers contemporary and refined Mediterranean dining; a fusion of traditional Mexican cuisine with a Korean flair, a.k.a my two FAVES.

We honestly struggled to pick what we wanted which is a good thing and also means I'll have to go back to order the other tempting dishes on the menu such as avocado fries and baos.

We opted for the daily special tacos, sweet potato fries and chicken arepas.

We tucked in and looked at each other smiling - this was better than I expected.

Crunchy red cabbage, tangy guac and smoky meat excited my senses as I demolished my taco in a matter of bites. I'm a sucker for sweet potato fries and the ones we had were perfectly crunchy. 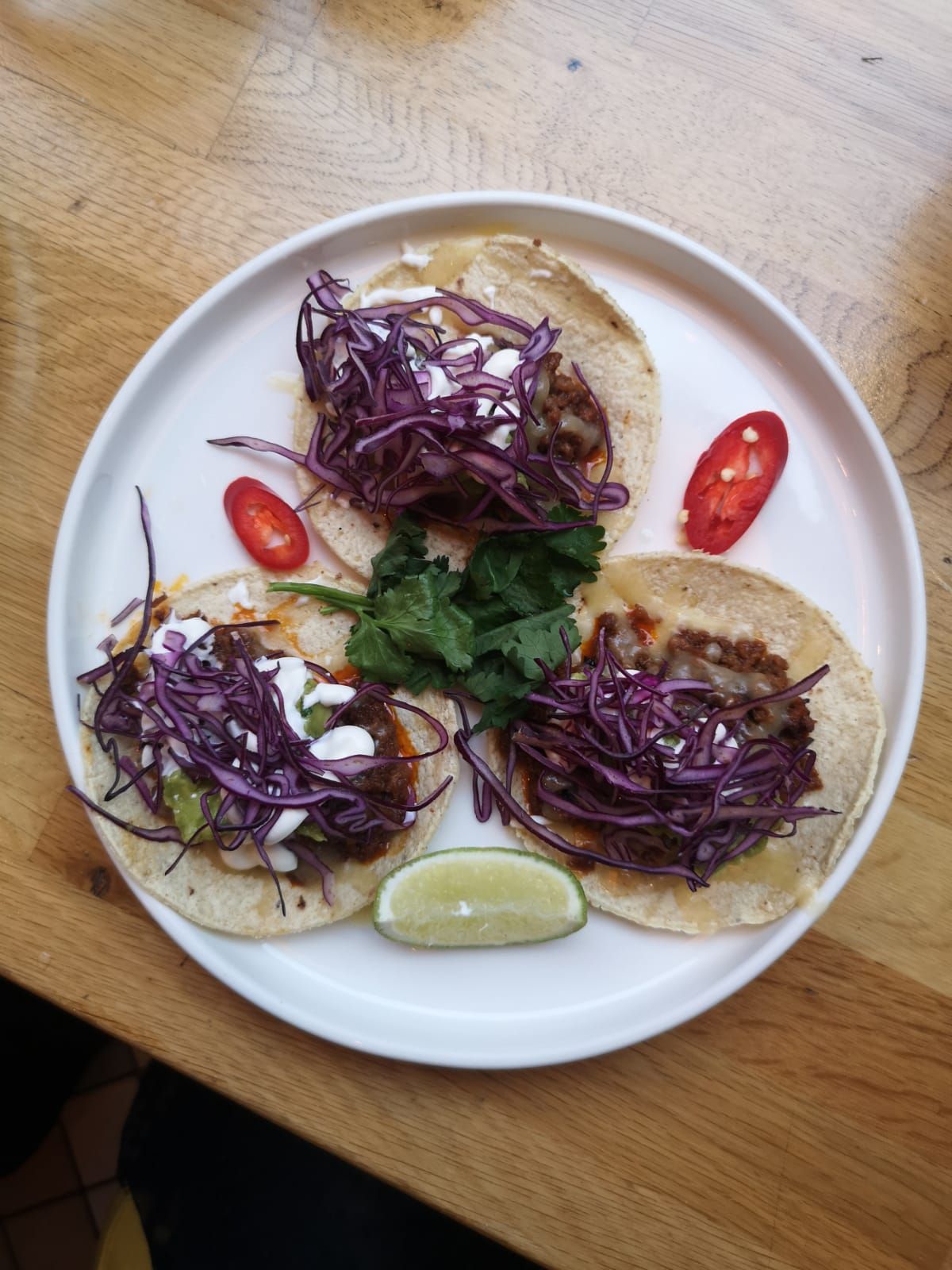 The star of the show for me, however, was the arepa.

Cooked on the bone and tossed in Asian sauce, the chicken was so flavoursome. My arepa was a tiny bit undercooked in the middle but because of the chicken was so good, I could let it slide. With salsa, feta cheese, coriander and guac - this fusion of flavour from different cultures was sublime.

F E E D 😍. . Finally checked out @juanitos_dublin yesterday and it was fab, such a gr8 spot to bop into if you're with a group of friends and want something easy, tasty & unfussy 🌹. . #dublinfoodie #dublinfood

Best of all, the dishes are healthy, vibrant and tasty so I didn't feel crappy after it.

All in all, I was really impressed by this seriously cool new kid on the block and I will definitely be back again.

Next time you're inner-city and you're stuck for foodie inspiration look no further than Juanitos - such a spot.

A new reliable of Dubin.