You had me at Halloumi Spice Bag.

I love everything about it; the savoury soup, the noodle slurping, the spicy ones, the salty ones, the endless possibilities of dish variations, and even the mess. It’s a warming bowl of pure joy and, much like pizza, when it’s bad it’s still pretty good.

The last Ramen I had was in New York last month and it was a truly exceptional food experience. I was lucky enough to get a seat in the world-renowned slurp shop that is Ivan Ramen. You may have seen him on Netflix’s 'Chef's Table'. If you haven’t then please give it a watch this side of Christmas as it’s easily one of the best episodes of the award-winning series, and probably the best Ramen food porn that you will ever watch. I had Ivan’s famous Chicken Paiten Ramen, the rich chicken soup with the perfect emulsion ratio of soup-to-fat with minced chicken, vegetables and the painstakingly hand-made rye noodles that more than lived up to the hype.

So from Manhattan's lower east side to Dublin's middle east coast, I headed to Dun Laoghaire to check out SOUP Ramen. My cousin is a musician who plays in a venue nearby and had been going there as something of a pre-gig ritual for the past few weeks. He told me about this place so I thought it only fair that I bring him along. Even though I was typically excited for the Ramen, there was another thing on the establishment's menu that caught my eye - a Halloumi Spice Bag. I know people have mixed feelings about the spice bag but I straight-up unapologetically love them. I’d consider myself a connoisseur of sorts at this stage, having hit most of Dublin’s finest late-night Chinese take-aways after shows to get my fix of the brown bag of eye-watering, spicy, carby goodness with its quintessential polystyrene container (I’m sorry, Greta) of a unique type of green ‘curry sauce’ that exists only on this little island.

SOUP Ramen is a small, brightly lit corridor-type place with the kitchen on view and right in front of you as you walk in. We sit on one of the long wooden bench-seated tables. (My cousin has arrived with my other cousin - classic Ireland - who heard there was Ramen afoot and isn’t one to miss out). We order fast as the hanger is real. I had gone to the gym prior to this purely to ensure maximum hunger as I wanted to try a few things on their simple but appealing menu. 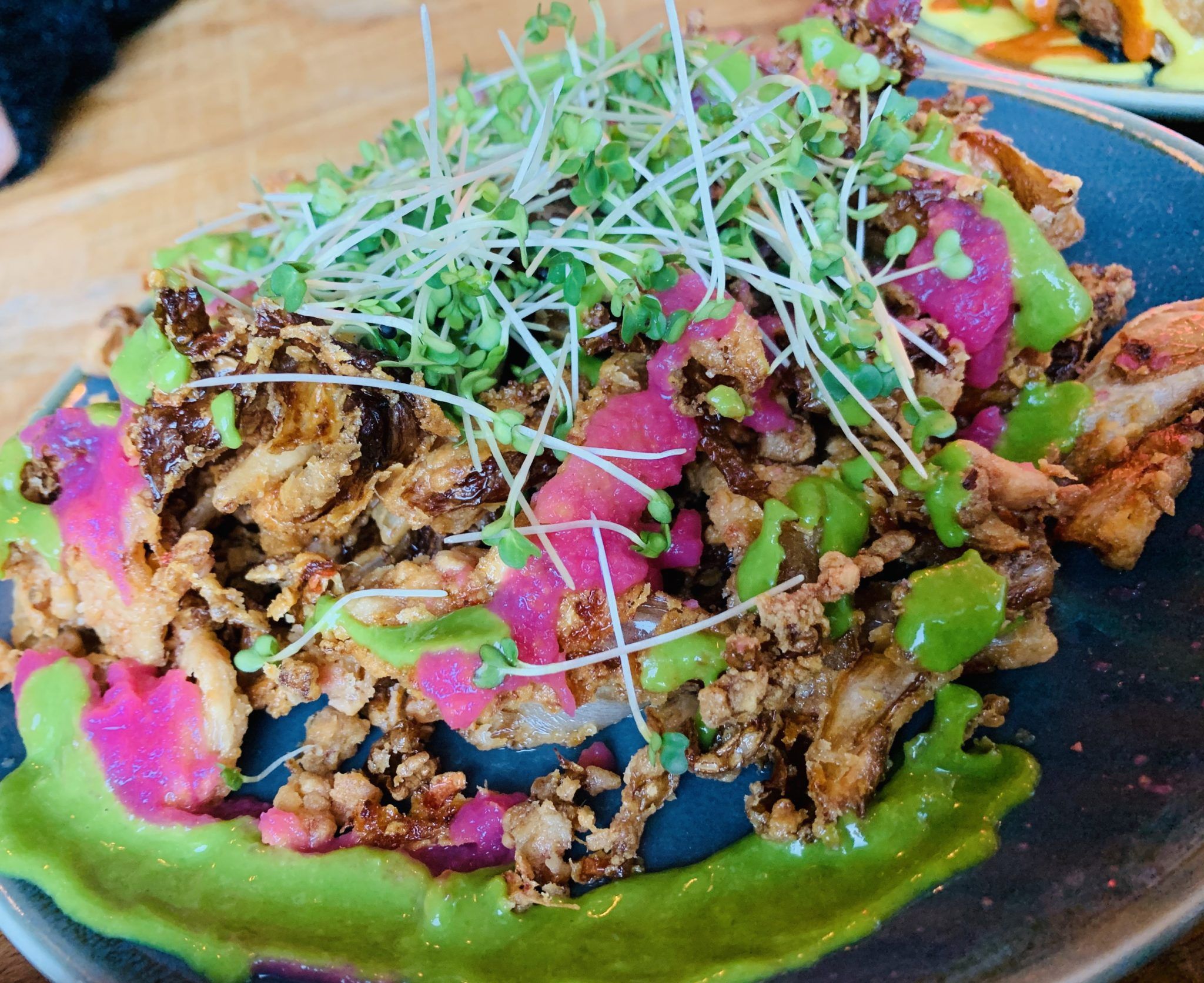 First out is the Deep Fried Kimchi with beetroot ketchup and avocado puree. I liked the look of this and hadn’t seen it before so I was excited to give it a try. It’s crisp and spicy and almost like a great (but obviously squid-free) calamari in texture. It’s light and tangy and some of the nicest kimchi I’ve eaten although not as healthy as the unbattered type. The beetroot ketchup is a great accompaniment, as is the avocado puree. You’d happily have this along with some steamed rice as a main course dish.

Next out is the Fried Chicken with fermented chilli mayo and mango butter. There’s a bit of a Scottish trend here with the choice of starter cooking, I know. This fried chicken is good, like really f*cking good. They have used deboned chicken thigh for this and it's so damn morish it’s untrue - perfect chunky morsels, well cooked but not overdone, the fermented chilli mayo is like a stepped-up version of Sriracha mayo but the mango butter is the revelation here - rich, sweet but not in a sickly sugary way, and the two combined is a winning combo. 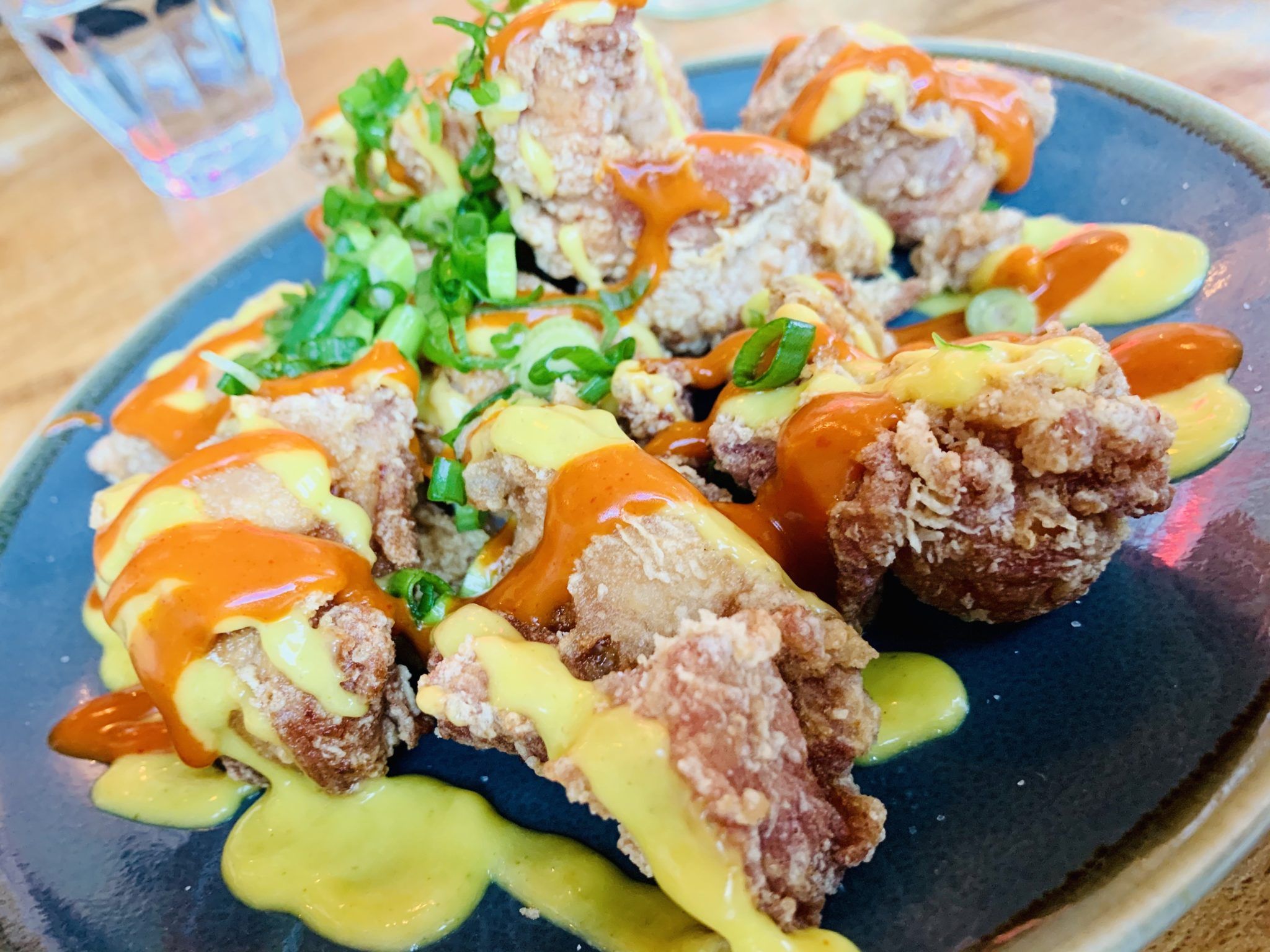 Then comes the Halloumi Spice Bag (well spice plate). It’s bright, fresh and the most visually pleasing spice bag I’ve ever set my greedy eyes upon. It’s almost too pretty to be named as such. The halloumi pieces are almost tofu-like in texture, these spicy, salty chunks of cheesy goodness taste great. The veg tastes good too but the chips are a bit on the soggy side. I think this comes with the territory of adding this much fresh veg. The reason take-away ones are crisper is due to the mere whisper shavings of carrot and thinly sliced onion thrown in almost as a seasoning.

There is a choice of three Ramens on the menu so we order all three and agree to swap so there is no food envy/arguments. Each Ramen comes with a choice of seasonings; Shio (salt & seaweed), Shoyu (soy, ginger & garlic), miso, coconut and kimchi. First up is the Chicken Ramen with Shio. The broth is light, clean, clear and tasty and the veg is fresh, the seasoned egg is perfectly cooked and it’s warm throughout (one of my biggest pet hates is a cold egg that has been cooked hours before being then just sat into the Ramen broth - a cold runny yolk is deeply upsetting to me and I know I’m not alone on this). The chicken has been cooked and charred on a griddle to perfection and its smoky, deep caramelized flavour from this makes all the difference. The tender stem broccoli is charred and a great addition to this too along with the pak choi. The noodles are cooked well with a little bit of bite just as they should be. 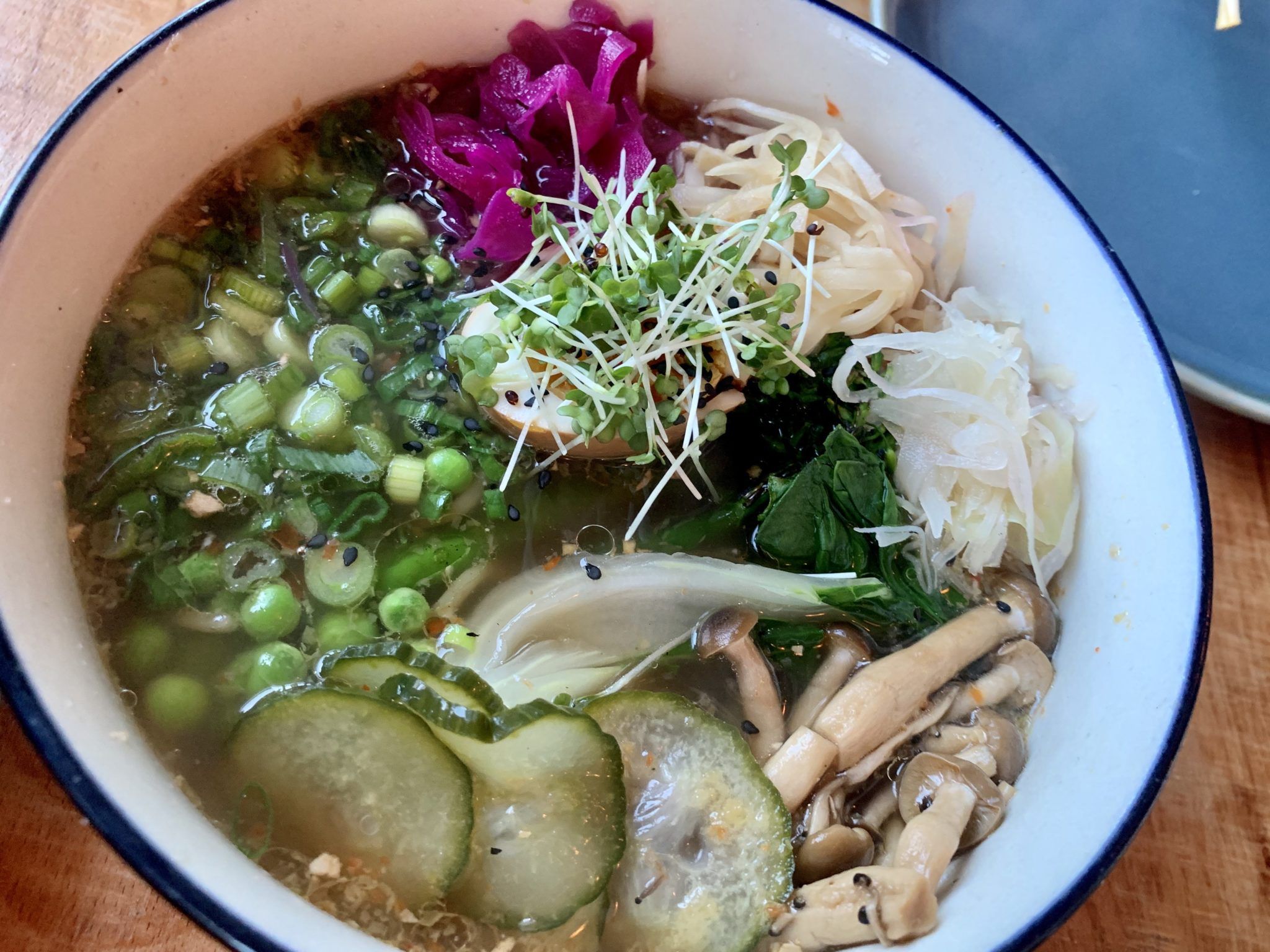 Ramen number two is the vegetarian option with Yasai vegetable broth. We chose this one seasoned with kimchi as an insurance policy of it not being as tasty as its meaty comrades. This Ramen is the perfect example of how you don’t need meat to have a great meal, the shimeji mushrooms (which sound almost magical) are native to East Asia and northern Europe are tasty as hell. The pickled red cabbage and veg make this a serious bowl of noods. The broth is as clean and fresh as the first Ramen, the sliced pickles on top seem a little out of place visually but they work and are a great addition. The kimchi gives the broth a nice spicy tangy kick but I think either the Shio or Shoyu seasoning would be equally as good.

Our third and final Ramen of the day is the Tonkotsu Pork and this one has been seasoned with miso. The pork belly on this is some of the meatiest I’ve ever eaten, a perfect rectangle and not super fatty as pork belly can sometimes be. The shimeji mushrooms make another star appearance. This Ramen is the most savoury of all three and the miso makes it almost overwhelmingly so. If you were starving and in a hurry then this Ramen is the bowl for you, you couldn’t but be full from it as the miso adds a layer of savoury viscosity and makes the Ramen pretty heavy compared to the other two. The pickled veg helps take the edge off but if I came again I think a lighter seasoning would be a better option for this one.

The three of us are beyond full and the Ramen sweats are kicking in. We couldn’t possibly eat any more food. So we order desserts. 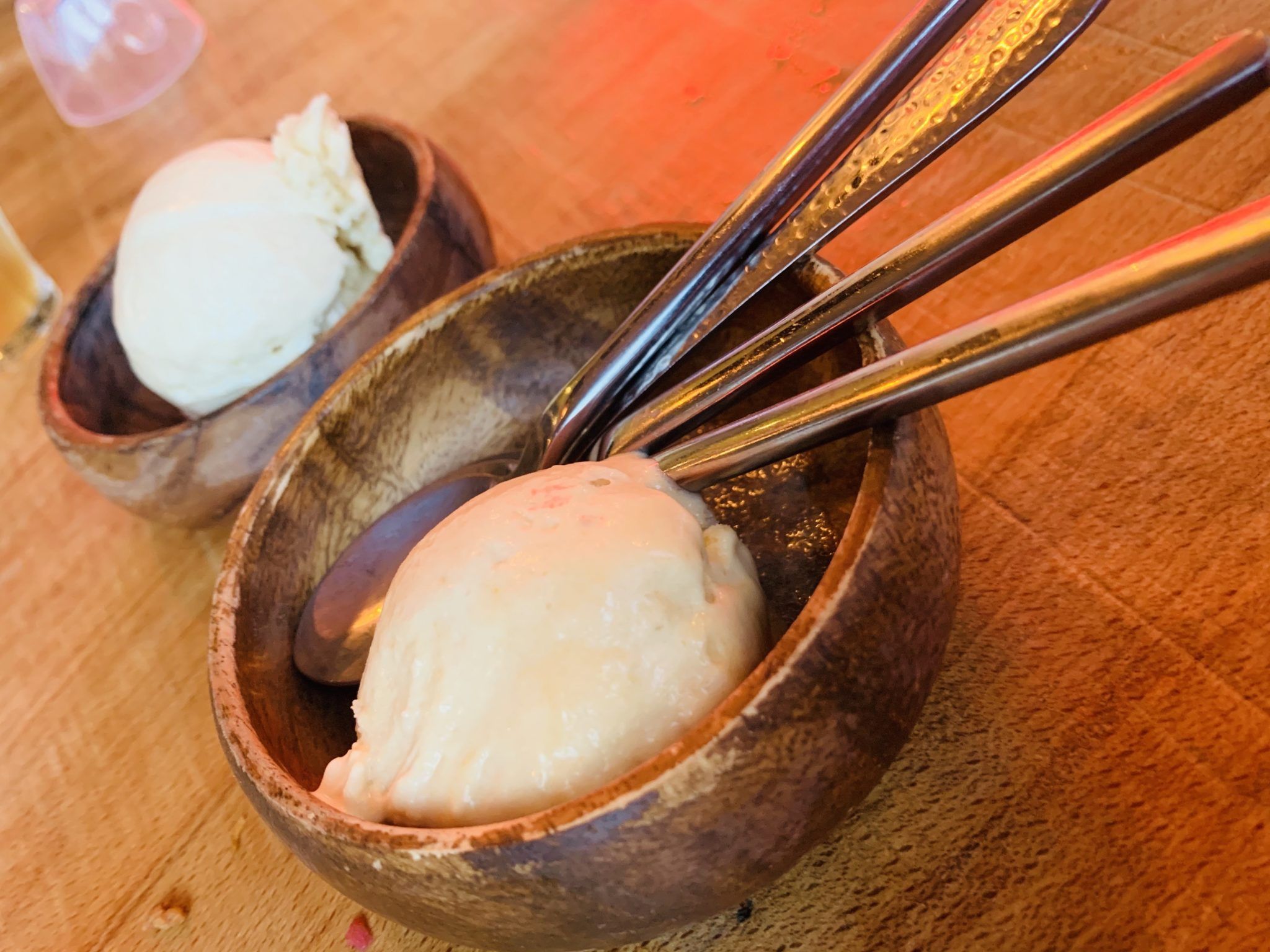 Ordering dessert when already extremely full and going too hard on bread at the start of a meal are two of my biggest flaws as a human. Of the small but different mix of house ice creams, we go for brown bread and butter ice cream and coconut. The first is definitely more butter than bread (I couldn’t see or taste any to be honest), containing more of this yellow crack in a single scoop than the entire Butter Museum in Cork. It’s too much to take and I’m glad we had it at the end of the meal as I fear everything would’ve tasted of butter had I eaten it at the beginning. The coconut seems again to be an 80/20 coconut-to-ice-cream and it’s like a slightly more sophisticated Bounty bar ball without the chocolate. If desiccated coconut isn’t your buzz then maybe give this one a wide berth.

All in all SOUP Ramen was great. The sides and sharing dishes exceeded expectations and the Ramens were delicious, filling, diverse and flavourful. For €12 a bowl, I think this is serious value for money given the quality of their bowls. The staff are sound and helpful and it’s bright, clean and casual. SOUP Ramen is a relatively new kid on the block but this small independent Irish eatery is an excellent addition to the town of Dun Laoghaire. If they are starting this strong I think this place of Ramen worship is only going to get better and better, and will become a very popular and permanent fixture in an already thriving food scene in the coastal Dublin town. However, I might walk down to Teddy’s for an ice-cream for my dessert next time.

A cool new coffee van is opening up on the Northside

Last weekend to get your hands on this insane Christmas Toastie

This Dublin spot is doing a Cheeseburger Toastie special this weekend